The primary source of federal victim assistance funding comes from the Crime Victims Fund, which was established by the Victims of Crime Act (VOCA).  The Crime Victims Fund includes funding from fines and penalties paid by convicted federal offenders, not from tax dollars. Yet, in spite of the exceedingly high crime rates and great need for victim services in Indian country, tribes receive less than 0.07 percent of the Crime Victims Fund. While states and other territories can access funding directly from the Crime Victims Fund, tribes must apply to the states for these resources. Recognizing the lack of parity in VOCA funding, Senator Barrasso called for expanded tribal access to resources for crime victim services and will release a plan in the near future to change the status quo for Native victims of crime. In the current legislative session, two Senate bills have been introduced proposing amendments to VOCA, yet neither bill contains specific directives regarding funding for tribes. Some tribes are advocating for a change in the law to designate federally recognized Indian tribes as eligible for the Crime Victims Fund and to require that 10% of authorized funds be Congressionally appropriated to American Indian and Alaska Native tribal governments. These demands echo positions supported by the National Congress of American Indians, a recent Department of Justice report on American Indian and Alaska Native Children Exposed to Violence, and the National Task Force to End Sexual and Domestic Violence.

Committee Vice Chair Senator Jon Tester (D-MT) said “Crime is a reality in too many communities and too many homes in Indian country.” The Fort Peck reservation, in Tester’s home state of Montana, lies within the boundaries of one of the largest growing crime regions in the country – the Bakken. Tester pointed to fleeting resources and temporary grant funding as issues to be addressed and supported the call for a set aside for Indian country.

Darren Cruzan, Director-Office of Justice Services, Bureau of Indian Affairs (BIA), reported that the BIA has just ten victim specialists which, in 2014, served 2,100 victims. Cruzan submitted written testimony calling for the designation of funding specifically for tribes to establish and strengthen victim service programs. His testimony outlines programs that would greatly benefit from a tribal set aside such as trauma informed care centers, culturally specific sexual assault services, and financial assistance for emergency shelter and transportation. 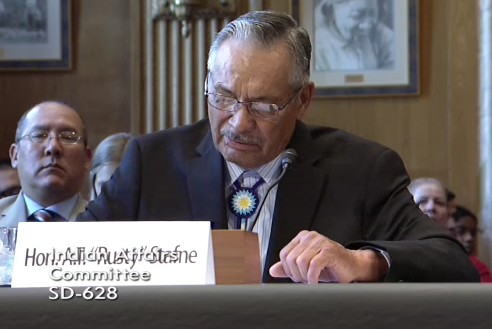 The Honorable A.T. “Rusty” Stafne, Chairman of the Fort Peck Assiniboine and Sioux Tribes, then described the considerable need for victim services at Fort Peck Reservation. “Violent crime on the reservation is five times higher than most of Montana [and] three times higher than the U.S.” With over 700 reports of domestic violence in just one year and law enforcement operating at just fifty percent capacity at Fort Peck, Stafne told the Committee there is a clear need for consistent sources of funding to adequately run services. Apart from some recent grants, Stafne said tribes are receiving no resources from the Crime Victims Fund. Stafne called for a more reliable set aside of funds for Indian country.

The Honorable Dianne Barker Harrold, Tribal Court Judge, Pawnee Nation of Oklahoma, informed the Committee that crime victims’ needs in Indian country have yet to be adequately acknowledged, understood, and addressed.  She called for the establishment of state and tribal liaisons to enhance knowledge of and facilitate access to state victims’ compensation funds for tribal crime victims. Barker Harrold also reported that crime victims in Indian country are often hesitant about reporting crimes because there are no support services, and they fear intimidation by their offender. Barker Harrold has witnessed revictimization on several occasions, including two instances where victims were later murdered.

Gerad Godfrey, Chair of the Violent Crimes Compensation Board and Senior Advisor, Rural Business and Intergovernmental Affairs, Office of the Governor, State of Alaska, testified about the lack of adequate victim services in Alaska. He stressed the need to implement best practices, such as Sexual Assault Response Teams composed of a law enforcement officer, victim advocate, and forensic nurse, to be deployed to regional areas and ensure all services are activated. Godfrey told the Committee that up until recently victims of sexual assault in Bethel had to travel for hours by plane to Anchorage for medical care and to undergo a sexual assault exam. “This is entirely unacceptable,” Godfrey said. He also echoed other witness testimony calling for a tribal set aside.

Committee members acknowledged the lack of funding and resources and vowed to address these critical needs. Senator Heidi Heitkamp (D-ND) was “horrified” by the statistics heard during testimony. “Native children are getting left behind. “ “We are not funding what we need to fund.”