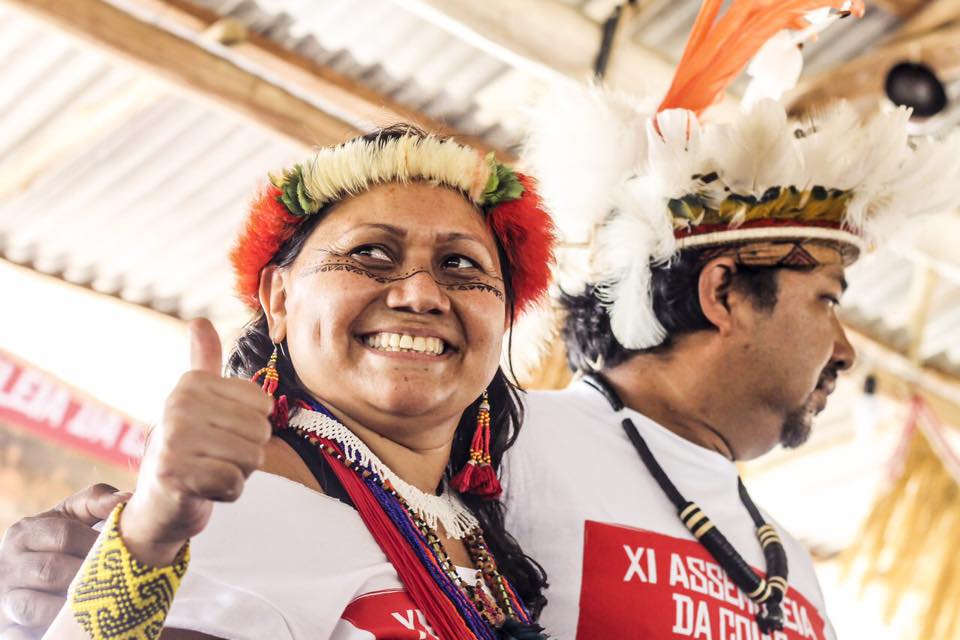 One of the largest indigenous organizations in South America, Coordinator of Indigenous Organizations from the Brazilian Amazon (COIAB), has for the first time in its history, elected an indigenous woman to serve in its top post. In August, nearly 600 leaders representing indigenous communities throughout the Brazilian Amazon River basin, gathered at the Alto Rio Guamá village in the State of Pará to participate in COIAB’s assembly and elected Nara Baré to lead their work forward.

“I was moved by such a transparent and inclusive election that led to overwhelming support for Nara Baré,” said Leonardo Crippa, Center senior attorney.  Crippa was invited to the COAIB’s assembly to give a presentation on public sector financial institutions’ policies and international legal standards on indigenous peoples. “I had the opportunity to meet Nara Baré and let her know how much we look forward to working with her and COAIB on protecting indigenous lands and territories in South America.”

Crippa’s presentation gave special attention to the World Bank’s new policy on indigenous peoples, the Environmental and Social Standard 7 Indigenous Peoples that was adopted last year.  “Because of the constructive dialogue between COIAB and the Brazilian Development Bank, the leaders were genuinely interested in learning about banks’ policies on indigenous peoples, especially about measures designed to support community-led development projects and safeguard indigenous communities and their environment from harmful projects,” said Crippa.

The leaders were particularly pleased to learn about the safeguard measure adopted to protect indigenous peoples living in voluntary isolation, because of a number of them are facing extinction in the Brazilian Amazon region.  The World Bank’s Standard 7 on Indigenous Peoples states that “the Borrower will take appropriate measures to recognize, respect and protect their land and territories, environment, health and culture, as well as measures to avoid all undesired contact with them as a consequence of the project. The aspects of the project that would result in such undesired contact will not be processed further.”

“This is one of the many good outcomes of long-standing advocacy carried out by indigenous leaders and experts from the Americas,” said Crippa. For many years, leaders such as Haroldo Salazar Rossi, a leader of the Ashaninka People from Peru, have called attention to the need to ensure legal and policy safeguard measures for indigenous peoples living in voluntary isolation along the Amazon River basin.  As a result, they have also succeeded in winning protections in both domestic laws—e.g. Ecuador, Brazil, Bolivia and Paraguay—and in the American Declaration on the Rights of Indigenous Peoples, which was approved by the Organization of American States in June, 2016.

The Center is continuing to work with COAIB’s leaders and indigenous peoples in the Brazilian Amazon to build their policy advocacy capacity and help them engage in policy making processes.