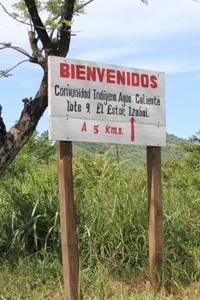 Rodrigo Tot, a political leader, and attorney Carlos Pop have been on the frontlines of the legal effort to secure protection of the Agua Caliente community’s land and resource rights and bring a halt to plans for mining in the community’s territory.  Because of the legal actions, their lives and the lives of their families have been under serious threat, despite the ruling issued in February 2011 by the Constitutional Court of Guatemala – the country’s highest court – in favor of the community and against mining interests.

“The government’s lack of enforcement of the Constitutional Court ruling in favor of Agua Caliente’s land rights, coupled with threats and intimidation from officials of the mining company, led to a situation in which mining interests rule in El Estor, not the rule of law,” said Leonardo Crippa, an attorney in the Center’s Washington, D.C. office.

In early October, one of Tot's sons was murdered and another was seriously injured during what appeared to be a staged robbery.  The murder and the repeated threats against community representatives led the Inter-American Commission to request that Guatemala immediately investigate and identify and punish those responsible.

“The Commission’s protection order helps us a lot in facing the increasing level of violence in this country—my family and the community of Agua Caliente feel safer because of the step forward the Commission decided to take in our case,” said Rodrigo Tot.

Since HudBay Minerals of Canada sold the “Fenix” mining project to the Russian based Solway Investment Group in September 2011, violence against the Agua Caliente has escalated.  The acquisition happened regardless of the Constitutional court's ruling in favor of Agua Caliente.

“It is time for Guatemala to start taking appropriate measures to address the role of businesses in human rights violations, especially when there is lack of enforcement of rulings in major land rights cases favoring indigenous communities,” said Crippa.