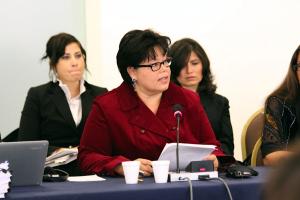 WASHINGTON, D.C. -- During an historic hearing dedicated to their missing and murdered Native sisters throughout the Americas, Native women and tribal advocates resorted to an international human rights body to raise global awareness on the epidemic of violence against Native women in the United States. Representatives of the United States appearing at the hearing admitted that the level of violence against Native women is “an assault on the national conscience.”

“The right to be safe and live free from violence is a fundamental human right that many take for granted—but not Native women in the United States,” said Jana Walker, Director of the Safe Women, Strong Nations project at the Indian Law Resource Center.  “Through this unprecedented hearing—the first of its kind—the Inter-American Commission on Human Rights has made it clear that others in the world are now focusing on this crisis too.”

The October 25, 2011, thematic hearing before the Inter-American Commission on Human Rights, an autonomous organ of the Organization of American States (OAS) created by countries to protect human rights in the Americas, was the first ever to focus specifically on violence against Native women in the United States.  The Commission, located in Washington, D.C., took testimony during an hour-long hearing from representatives of the Indian Law Resource Center, National Congress of American Indians Task Force on Violence Against Women, Eastern Band of Cherokee Indians, Clan Star, Inc., and the National Indigenous Women’s Resource Center, Inc.

The epidemic of violence against Native women in the United States is a human rights crisis that Indian country has been aware of for far too long.  “It was imperative for this panel to make clear to the Commission how systemic legal barriers in U.S. law and chronic lack of enforcement is allowing rapists and batterers to commit crimes against Native women without fear of punishment whatsoever,” noted Juana Majel Dixon, First Vice President of the National Congress of American Indians and Co-Chair of the NCAI Task Force on Violence Against Women.

According to U.S. Department of Justice statistics, 1 out of 3 Native women will be raped in her lifetime and 3 out of 5 will be physically assaulted, while their offenders escape prosecution under the color of discriminatory United States law.  In this human rights crisis, Native women are murdered at rates 10 times the national average, and subjected to domestic violence and assault at staggering rates — rates 2½ times higher than any other group in the United States.

These distressing statistics are linked to systemic barriers imposed by United States law—barriers that prevent Indian nations from effectively safeguarding their citizens and adequately responding to crimes.  Unlike local communities or state governments, Indian nations and Alaska Native villages are legally prohibited from prosecuting non-Indians.  Furthermore, federal law has greatly restricted the sentencing authority of tribal courts for offenders committing acts of sexual and domestic violence that occur within tribal lands and communities.  In effect, United States law condones violence in Indian country and Alaska Native villages, where 88% of the violent crimes against Native women are committed by non-Indian perpetrators.  Very few of these Native women have access to meaningful justice and ever see their assailants prosecuted.  According to a recent United States Government Accountability Office study, U.S. attorneys failed to prosecute 52% of all violent criminal cases, including 67% of sexual abuse cases and 46% of assault cases occurring on Indian lands.

“In most non-Indian communities in the United States, county or city governments have, by and large, unquestionable authority to investigate and prosecute both misdemeanor and felony crimes committed against women,” testifiedDorma Sahneyah, Vice Chairperson for the National Indigenous Women’s Resource Center and Executive Director of the Hopi Tewa Women’s Coalition to End Abuse.  “United Stateslaw has left Tribal governments with inadequate legal authority to protect its citizens, allowing perpetrators to prey on Native women with impunity.”

Lisa Brunner, Executive Director of the Sacred Spirits First Nation Coalition, described the devastating impacts of Public Law 280 on the safety of Native women and tribal justice systems.  “Many young Native girls and their mothers are forced to plan for a rape and how they will respond,” testified Brunner.  She described one pre-rape decision by a 14-year-old girl and her mother to not report the event when it happens for fear that nothing would be done and it would cause problems for their family.  “When the issue within Native communities becomes a matter of preparing your daughter to be raped, the United States has failed in its federal trust responsibilities to our tribes.”

Recommendations to Improve Safety for Native Women in the U.S.

The Native women and tribal advocates concluded by urging the Commission to issue strong recommendations  to the United States with respect to its obligations to Native women under international human rights law.  Terri Henry, Co-Chair of the National Congress of American Indians Task Force on Violence Against Native Women and a Tribal Council Representative for the Eastern Band of Cherokee Indians, detailed the following recommendations targeted at the United States:

Henry also urged the Commission to conduct site visits to Indian nations throughout the United States to further investigate these ongoing human rights violations against Native women and its implications for U.S. international human rights obligations.  Additionally, Henry asked the Commission to issue a special report or country report on how the United States, in consultation and collaboration with tribes, could better protect the human rights of Native women.  The panel of advocates also urged the Commission to include information related to this hearing in its press release on the 143rd Ordinary Period of Sessions and in its Annual Report to the Organization of American States General Assembly.

Representatives of the United States appearing at the hearing acknowledged that much more needs to be done to protect Native women.  Virginia Davis, U.S. Department of Justice, explained that, for many reasons, the current legal structure for prosecuting crimes of violence against women in Indian country is just not working.  The Department of Justice and the Department of the Interior are recommending legislation and refinement to existing laws to better protect Native women, and both Departments support the reauthorization of the Violence Against Women Act and proposed amendments.  Jodi Gillette, U.S. Department of the Interior, echoed Ms. Davis’ comments, adding that the goal is to move towards a system that will eliminate the devastating problem of violence against Native women.

The Violence Against Women Act is up for reauthorization in the U.S. Congress and, since the thematic hearing, on October 31, 2011, Chairman Daniel Akaka of the Senate Committee on Indian Affairs introduced S.1793, the Stand Against Violence and Empower Native Women (SAVE Native Women) Act.   Given the epidemic of violence against Native women, it is crucial that the United States do something quickly to restore safety and justice for Native women and to strengthen Native nations and communities.

For more information about the Violence Against Women Act, the SAVE Native Women Act, and to view or read about the thematic hearing on violence against Native women, go to menu on the left sidebar and click "Updates and News".