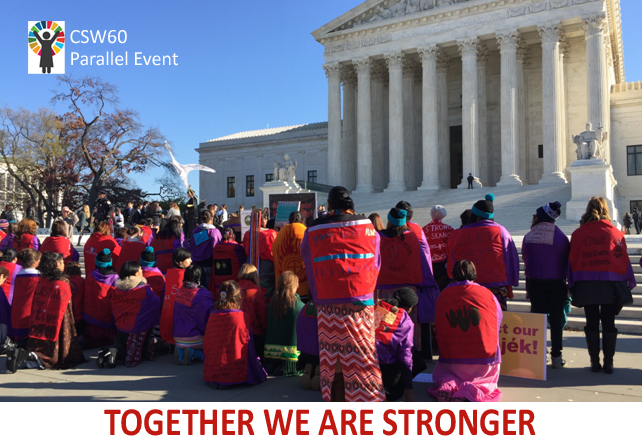 March 16, 2016| New York, NY  — Speakers from American Indian tribes, Alaska Native villages, and Canadian national indigenous organizations are set to converge for a critical panel discussion on violence against indigenous women and girls. The parallel event, titled Indigenous Women’s Movements to End Violence Against American Indian, Alaska Native, and Indigenous Women, will take place at the sixtieth session of the UN Commission on the Status of Women, on March 22, 2016 from 4:30-6:00 p.m. EST at the UN Church Center Chapel in New York City. 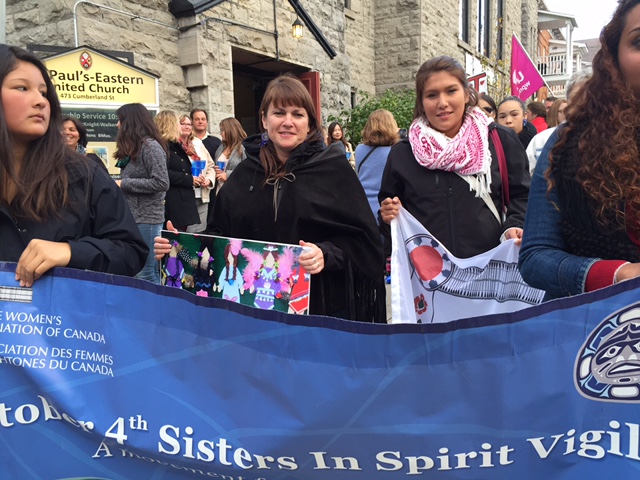 “Indigenous women and girls worldwide are subjected to multiple forms of discrimination, violence, and even murder, at rates much higher than other groups of women,” said Lucy R. Simpson, Executive Director of the National Indigenous Women’s Resource Center. “Our panelists have first-hand knowledge on how to organize and advocate for the social change and legal reforms that are needed to restore safety in our Native nations and communities.”

Panelists will also share strategies to advance the rights of indigenous peoples and women affirmed in the UN Declaration on the Rights of Indigenous Peoples, including the right of indigenous women to enjoy full protection and guarantees against all forms of violence and discrimination.

“Significantly, during the 2014 World Conference on Indigenous Peoples, member countries committed to support empowerment of indigenous women and to prevent and eliminate violence and discrimination against indigenous women,” said Jana L. Walker, senior attorney at the Indian Law Resource Center and director of its Safe Women, Strong Nations project.

Terri Henry, Co-Chair National Congress of American Indians Task Force on Violence Against Women and Chair of the Indian Law Resource Center Board of Directors, will speak about historic efforts to build the national movement for safety and sovereignty in the United States; Tamra Truett Jerue, Director of the Alaska Native Women’s Resource Center and Tribal Administrator and Director of Social Services for the Anvik Village Tribal Council, will focus on safety for Alaska Native women; and Dawn Lavell-Harvard, Ph.D., President of the Native Women’s Association of Canada, will speak about the movement for justice and accountability for missing and murdered indigenous women.

To attend the parallel event, you must register with the CSW NGO-Forum. Registration is free at ngocsw.org/ngo-csw-forum. For more information, email Jana L. Walker, at jwalker@indianlaw.org.