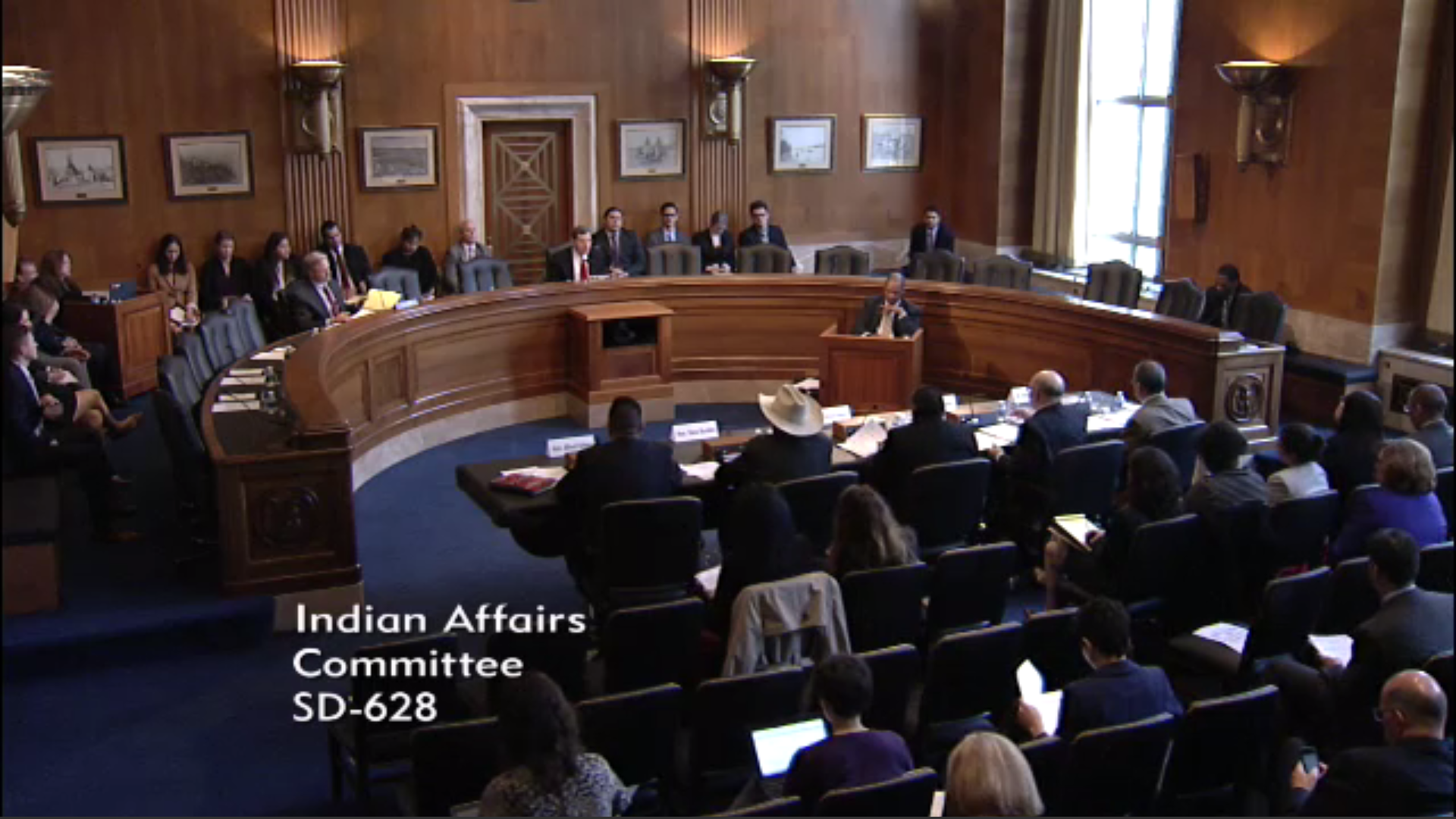 On Wednesday, May 18, 2016, the Senate Committee on Indian Affairs held a Legislative Hearing to receive testimony on two bills concerning tribal justice systems, the protection of Native women and children, and public safety in Indian Country:

Senator Tester described the devastating crime rates in Indian Country, pointing out the extremely high levels of violence being committed by non-Indian offenders against Indian victims in Indian Country, and noting that domestic violence is often related to drug use on tribal lands. S. 2785 could offer a solution to deal with the high rates of domestic violence in Indian Country by allowing tribes to also prosecute drug offenses. "Tribal communities must have every tool they need to protect themselves from folks who traffic illegal drugs and harm children in Indian Country," Tester said. "This bill gives tribes certainty and provides tribal law enforcement with the tools they need to police and prosecute every criminal in their community." Tester highlighted the need to recognize the sovereign authority of tribes to prosecute drug offenses in order to ensure the safety of their communities. Besides recognizing tribal jurisdiction over a broader range of crimes, the bill also would also expand the VAWA 2013 grant program to help tribes build their criminal justice system. 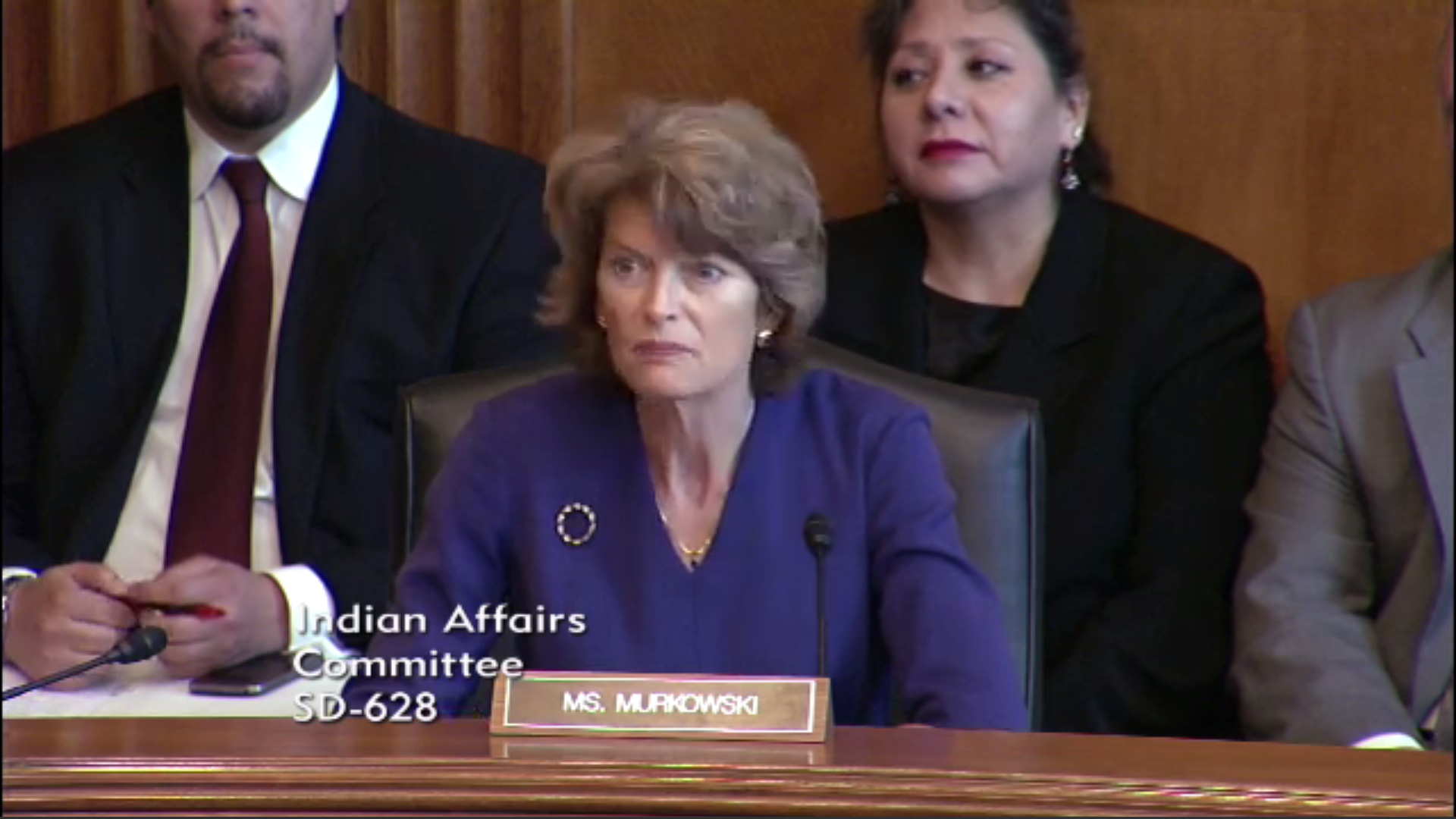 Senator Lisa Murkowski (R-AK) described her co-sponsorship of VAWA and consistent support of the partial Oliphant fix, codified in section 904 of VAWA 2013, and now known as special domestic violence criminal jurisdiction. As a consequence of Alaska v. Native Village of Venetie Tribal Government, 522 U.S. 520 (1998), she noted that most of the lands in rural Alaska occupied predominately by Alaska Natives are not Indian Country. Thus, Murkowski observed that "when we empower tribes to do more within the tribe's Indian Country, we effectively exclude Alaska."  Murkowski further observed that "there is no consensus in Alaska whether Venetie should be wholesale overturned, but neither is there consensus in Alaska that our tribes should be disempowered to maintain peace in the rural communities or to protect our people."

Murkowski stated that “over the last several years, it has been my impression that Alaskans are seeking a new paradigm for public safety protection in the rural communities and believe that tribes need to be empowered to be part of that solution." She discussed her work building the foundation for that in TLOA, which brought new Community Oriented Policing Services (COPS) funding to rural Alaska and has helped focus BIA on the need to support tribal courts in the state even though Alaska is not a PL 280 state. Murkowski emphasized that "it doesn’t matter that we are a PL 280 state. Our tribal courts have jurisdiction notwithstanding PL 280 and need federal support to exercise that jurisdiction.” In concluding, she noted that she was “committed to pursuing new pathways for protection of our Native people especially our Native women and our children.”  Murkowski suggested that “the specific challenges we face within Alaska . . . require perhaps a little more creative solutions going forward.” She added that "we need to be looking beyond the world as . . . it is structured today. If it means that we have to look to new jurisdictional definitions, these are some of the tasks we want to explore."

Senator Franken discussed how S. 2785 would help remove jurisdictional obstacles that have prevented tribes from prosecuting violence and sexual violence that occurs in their territory. Franken also pointed out how the opioid crisis has disproportionately affected Indian Country, particularly in Minnesota. In June 2013, the White Earth Reservation became the only reservation where the Department of Justice has assumed concurrent federal jurisdiction under TLOA. Despite this, Franken noted that the White Earth Band has not received any funding nor have any FBI agents been assigned to help patrol these reservation lands. Franken questioned the Department of Justice on why, after three years, this is the case. 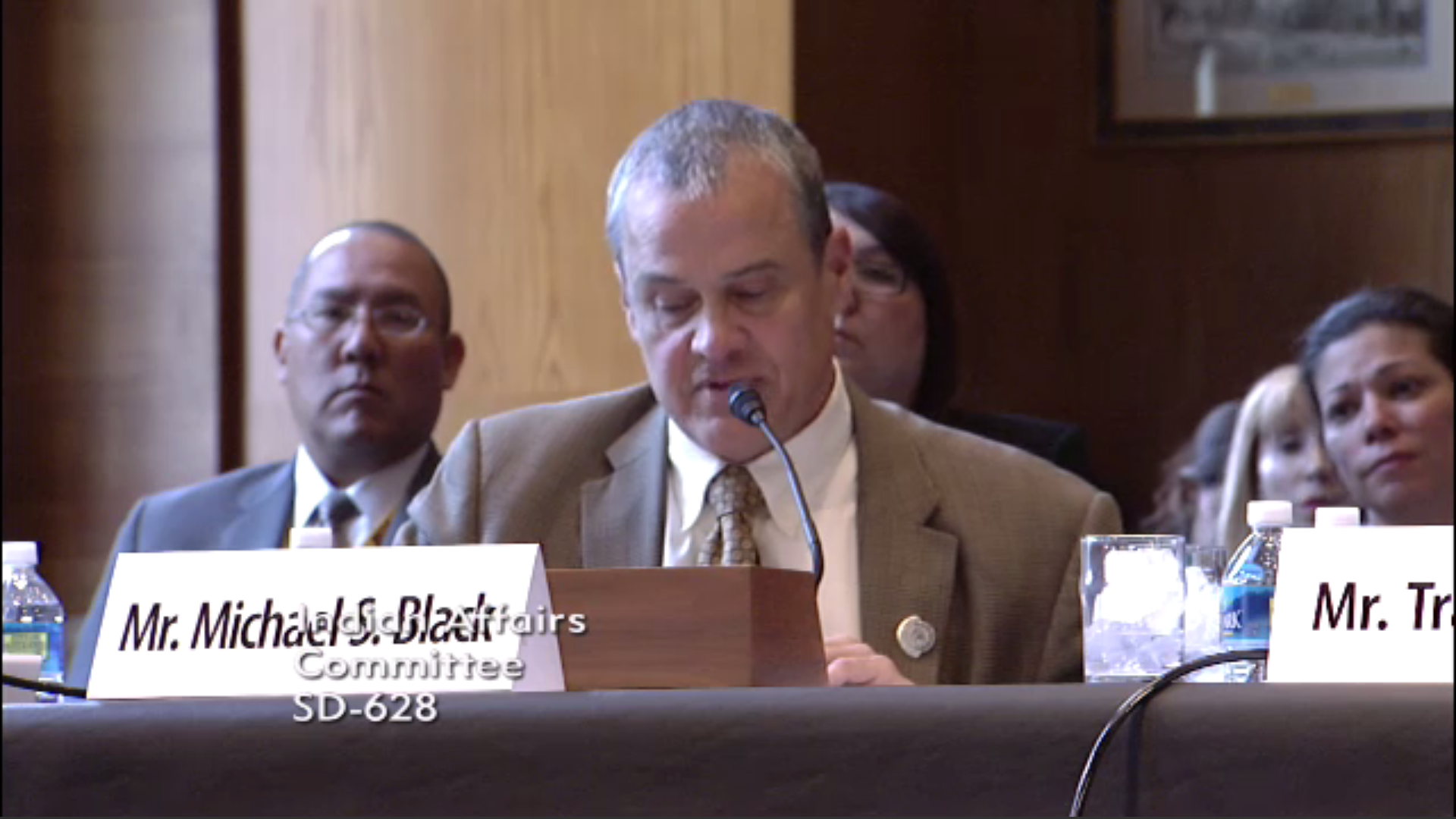 In his testimony, Michael Black, Director, Bureau of Indian Affairs, U.S. Department of the Interior, reported that the Department offers its full support for S. 2920 and S. 2785, with a few recommended technical and other changes included in his written statement. The Director highlighted the lack of incorporation of tribal crime information and data into state and federal databases, which would be remedied in part by S. 2920. Black also noted the Department's support for tribal court training programs that are critical to capacity building. However, he observed that S. 2920 does not address tribal justice system issues faced by tribes in PL 280 states, particularly those in California and Alaska.

Tracy Toulou, Director, Office of Tribal Justice, U.S. Department of Justice, offered testimony   identifying gaps in coverage of VAWA's section 904 special domestic violence criminal jurisdiction. Toulou stated that "while the Department fully recognizes the terrible impact of drugs on Native American communities, we recommend against expanding the universe of potential tribal court criminal defendants beyond domestic violence offenders in this particular bill [S. 2785]."  He noted that protecting Indian families from violence in their homes regardless of whether it is committed by an Indian or non-Indian has been a central concern for the Department. He discussed gaps regarding the special domestic violence criminal jurisdiction that have been identified by tribes and others, including confusion about the scope of required conduct, involvement of Indian children in crimes covered by § 904, and inability of tribes to protect tribal criminal justice officers and employees. Toulou indicated that the Department would be happy to work with the Committee staff to more effectively target non-DV offenders. The Department promised to submit its full comments on S. 2920 at a later date. 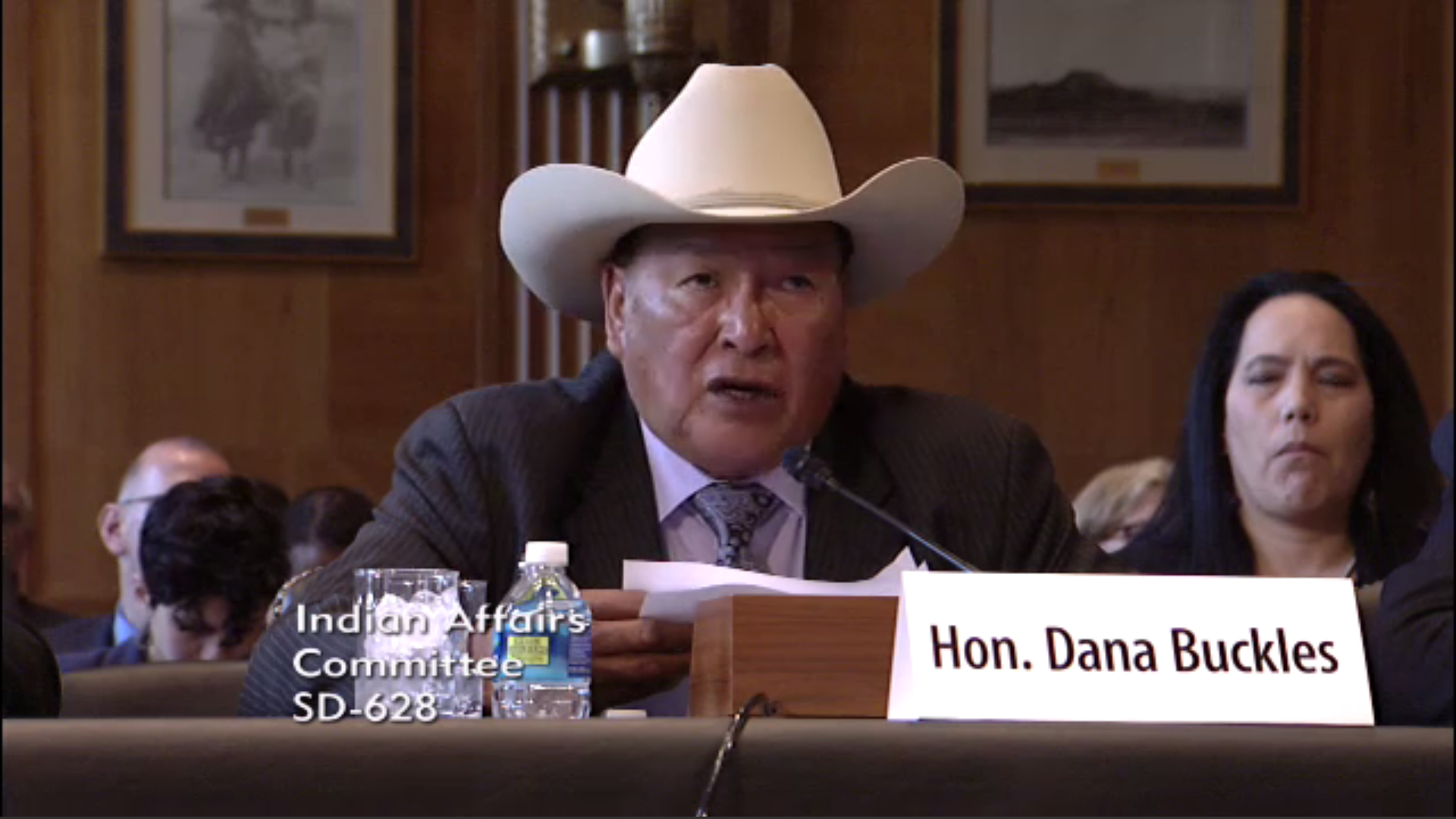 Dana Buckles, Councilman, Fort Peck Assiniboine and Sioux Tribes of the Fort Peck Reservation, offered testimony affirming the inherent authority of tribes to protect their communities and stating strong support of both bills. Buckles noted that S. 2785 would allow tribes to exercise their sovereignty to ensure that tribal members, especially Indian children, are safe. Though prosecuting crimes against children is one of the federal government’s highest priorities, the Councilman stated that there are simply not enough staff or resources to respond adequately and structural barriers in the federal system make certain prosecutions, like child molestation prosecutions, difficult. These barriers include the reluctance of victims and witnesses to travel outside their communities to testify and the fact that federal investigators often lack rapport with the community of local law enforcement officers. Buckles also testified about drugs and violence in Indian Country and the importance of building a strong tribal government and justice system. Buckles stated that if the Tribes had more resources, they would be used to build the Tribes’ court system and law enforcement. "We have long believed that a strong tribal government is the way that we can best keep our communities safe." However, Buckles added, "none of this will be realized without the proper funding from Congress." 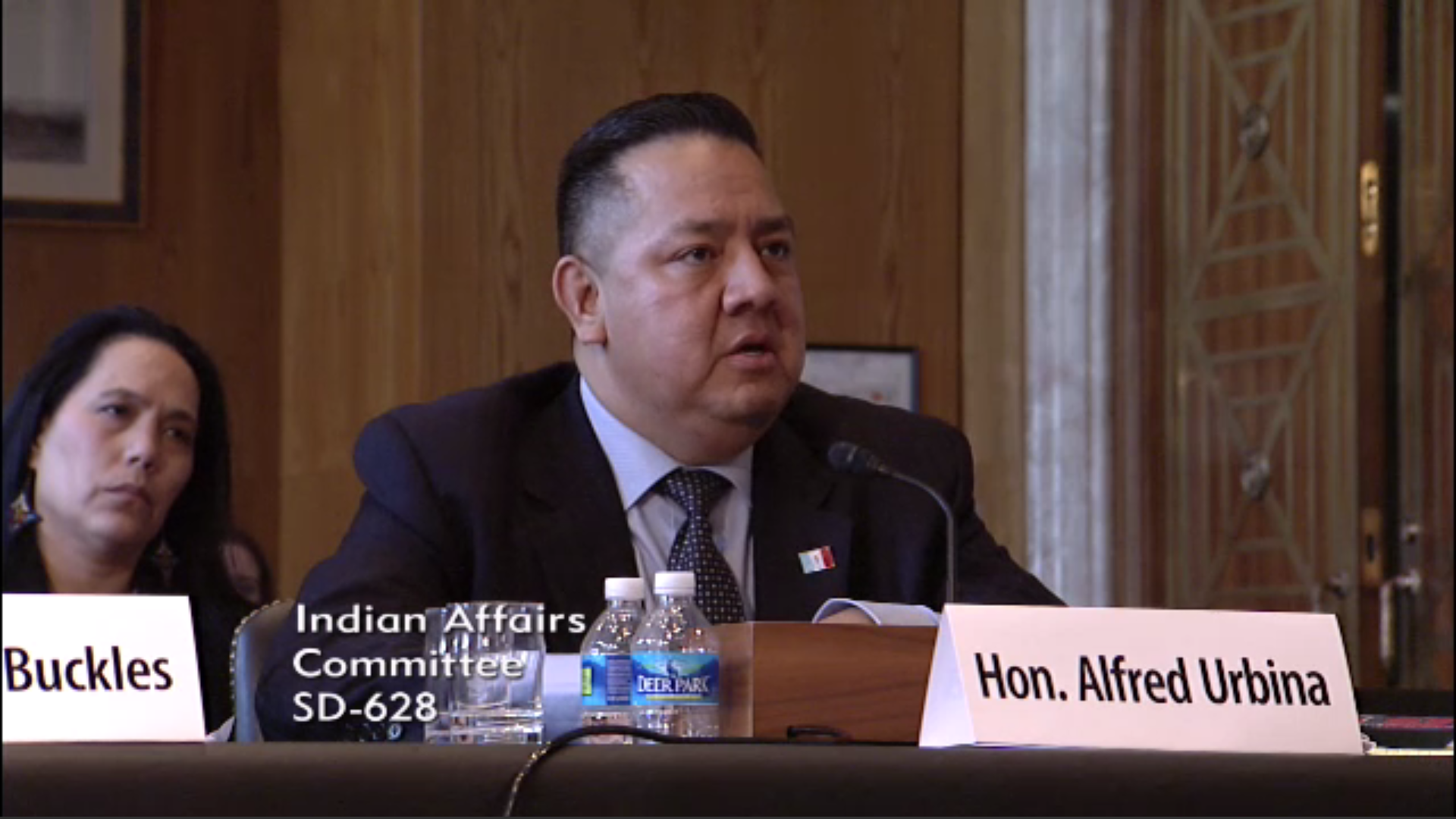 Alfred Urbina, Attorney General, Pascua Yaqui Tribe of Arizona, provided testimony in support of S. 2785 and S. 2920, describing the need for improving public safety and tribal law and order in Indian Country. He noted that these two bills would empower tribal justice systems and would go a long way to close jurisdictional gaps regarding violence against tribal families, to stop illegal drugs, and to provide more tools for cross-jurisdictional cooperation. Urbina described how the Tribe was one of three tribes that began exercising special domestic violence criminal jurisdiction in 2014. Based on the Tribe's experience, Urbina explained how the VAWA special domestic violence criminal jurisdiction is too limited and that tribes require the necessary authority to address crimes against children and drug related crimes. With respect to S. 2920, Urbina highlighted several important needs addressed in the bill, including the reauthorization of the Bureau of Prisons Pilot program, tribal access to data collection and criminal databases, and drug-trafficking-prevention programs.

The Indian Law Resource Center’s Safe Women, Strong Nations project works to end violence against Indian and Alaska Native women and children, to improve federal laws, policies, and practices to protect Native women and children and to restore criminal authority to tribes, and to strengthen the capacity of tribes to prevent and address violence on their lands. To learn more, visit www.indianlaw.org/safewomen.