Senate Resolution designates May 5, 2018 as a National Day of Awareness for Missing and Murdered Native Women 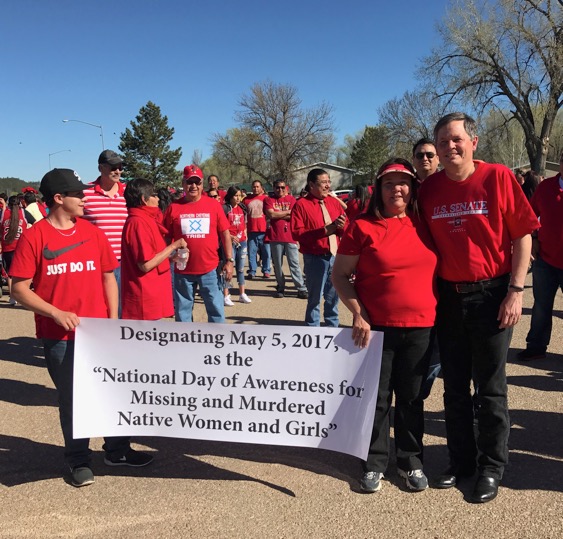 On July 5, 2013, Hanna Harris, a member of the Northern Cheyenne Tribe, was reported missing by her family in Lame Deer, Montana.  When her body was found five days later, she had been raped and murdered. “Too often in Indian country and Alaska Native villages indigenous women are disappearing and nothing is done,” says Jana Walker, director of the Indian Law Resource Center’s Safe Women, Strong Nations project.  “These disapperances arent being responded to in a serious, timely way and there's a lack of data about the numbers of indigenous women that are going missing.”

In February, Senator Steve Daines (R-MT) introduced resolution to designate May 5, 2018 as the “National Day of Awareness for Missing and Murdered Native Women and Girls.” The resolution, cosponsored by Senators Tester (D-MT), Udall (D-NM), Gardner (R-CO), Heitkamp (D-ND), Crapo (R-ID), and Rounds (R-SD), seeks to honor the memory of Hanna Harris, and seeks to commemorate other missing and murdered American Indian and Alaska Native women in the United States. The Senate unanimously passed a similar resolution last year.

This year's Senate Resolution 401, explicitly acknowledges a Department of Justice-commissioned study which found that in some tribal communities, American Indian women face murder rates more than 10 times the national average murder rate.  Further, the resolution also points to 2015 data from the Centers for Disease Control and Prevention finding that year homicide “ranged from the second to seventh leading cause of death for American Indian and Alaska Native females between 1 and 39 years of age” and “remained a leading cause of death for most American Indian and Alaska Native women."

On April 25, Senate Resolution 401 was passed by the Senate without amendment. “The Senate’s agreement on this resolution will continue to build national awareness of these horrific crimes and support for badly needed criminal justice reforms to protect Native women,” Walker adds.

Click here to read the full text of the resolution.