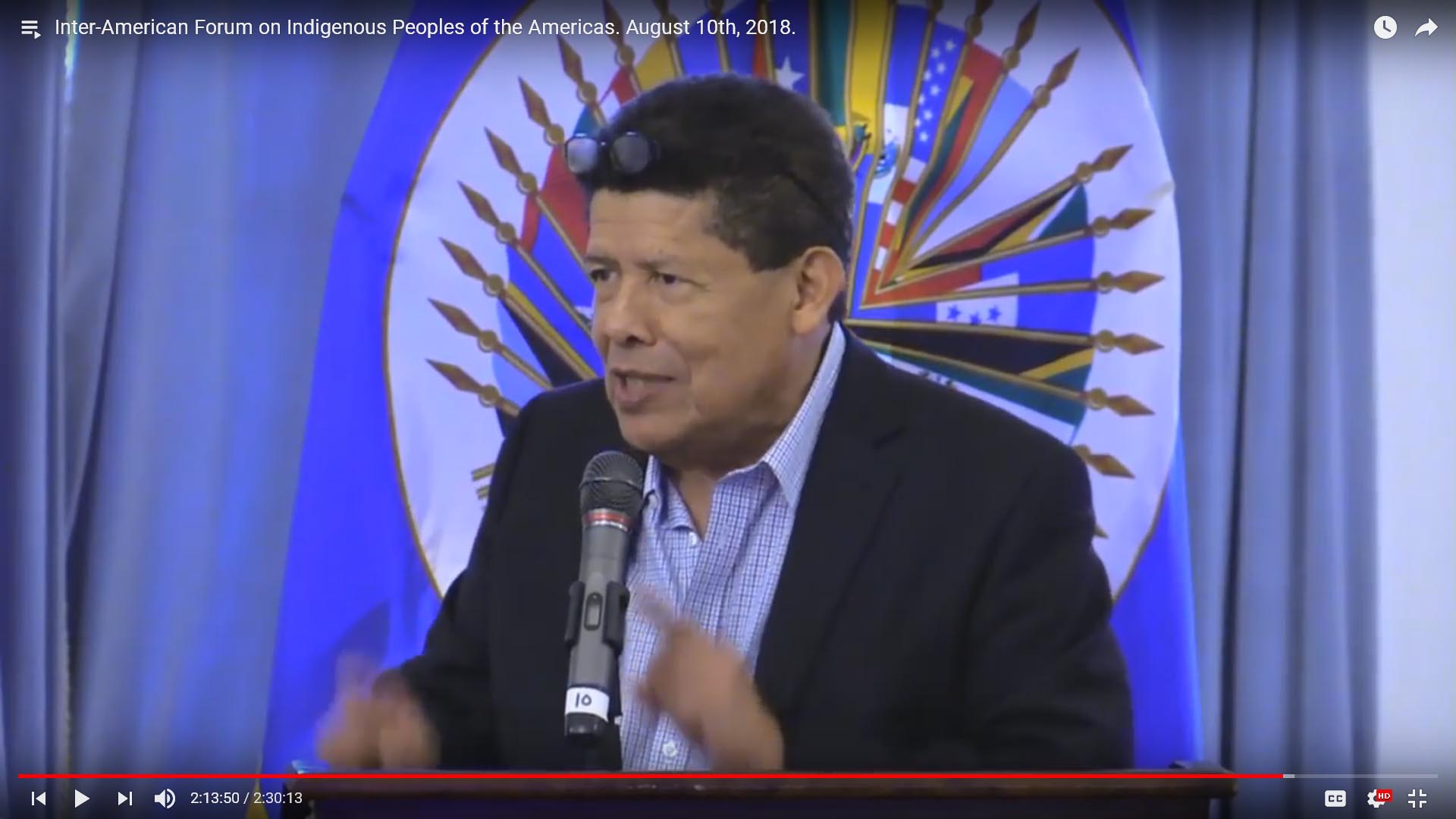 My name is Armstrong Wiggins. I am a Miskito Indian from the Atlantic Coast of Nicaragua, and today I speak in my capacity as the Director of the Washington, DC Office of the Indian Law Resource Center.

I would like to thank you for this opportunity to speak on the “Implementation of the Plan of Action on the American Declaration on the Rights of Indigenous Peoples” during this first OAS Inter-American Week for Indigenous Peoples. I am and will forever be grateful to witness the evolving engagement of the OAS, member states, and indigenous leaders from the Americas working together in good faith towards putting the American Declaration into action.

The Indian Law Resource Center has 40 years of experience in the area of indigenous peoples’ rights. The Center is a non-profit law and advocacy organization founded and directed by American Indians. The Center provides legal assistance without charge to Indian Nations working to protect their self-determination, lands, resources, human rights, environment, and cultural heritage. A hallmark of our work has been assisting indigenous peoples to establish international human rights standards, such as the UN Declaration on the Rights of Indigenous Peoples and the OAS American Declaration on the Rights of Indigenous Peoples.

The Center and hundreds of indigenous leaders spent 26 years negotiating with the OAS for a strong American Declaration, despite severe opposition by some states. The American Declaration, adopted on June 15, 2016, is a powerful and far-reaching statement of the rights of indigenous peoples, including their collective rights, such as the right of self-determination and their rights to their lands and resources, the rights of women and children, and the right to be free from discrimination and other abuses. The American Declaration also includes rights, such as the rights of indigenous peoples in voluntary isolation, that go beyond the UN Declaration.  Last  year, in conjunction with member states, we encouraged the adoption of a Plan of Action to implement the Declaration – to put these rights into effect at the OAS and to foster implementation among all member states. The Plan of action is a major step forward. However, much remains to be done, and we must start now.

Secondly, we call your attention to the need for creating a mechanism devoted to monitoring the implementation of the Declaration. This is one of the most important measures that the Plan of Action calls for at the hemispheric level. This measure was agreed upon by all member states because it will “promote a cross-cutting incorporation of the rights of indigenous peoples recognized in the Declaration in all aspects of the public life in the states.” Based on our experience, to achieve the goals of the Declaration, such a mechanism must also be capable of responding to major issues such as physical security and the right to life, indigenous lands and resources, protection of the environment, and the well-being and self-governance of indigenous peoples, including the health and safety of indigenous women and children. Real implementation of the Declaration must include responding effectively to serious situations affecting the rights of indigenous peoples.
The Center has several ideas about what this mechanism should be comprised of and what its mandate should be. While some of these ideas were proposed to the United Nations, there are more advanced ideas tailored to the OAS and its Inter-American Human Rights System, which we would be happy to discuss further. As a result of the World Conference on Indigenous Peoples, the UN strengthened its Expert Mechanism on the Rights of Indigenous Peoples, making it more capable of advising states, indigenous peoples, and the Human Rights Council, and also able to respond to serious human rights situations. We hope the OAS and its member states will create this much-needed regional mechanism tasked with monitoring the implementation of the Declaration and helping member states’ efforts to resolve situations affecting indigenous peoples’ rights.
Thirdly, we take this opportunity to state once again the importance for this organization of creating a new status that will ensure the permanent and more suitable participation of indigenous governments in OAS activities. This is the time for the OAS to take decisive measures to start addressing indigenous governments as such, and not as ordinary civil society representatives. The existing permanent status that allows indigenous non-governmental organizations to participate in OAS activities as civil society is counterproductive for indigenous governments. This inaccurate status is preventing indigenous governments from engaging with the organization, as some already do with the states where they are located.
Maintaining the status quo does not move us forward. We remind the OAS that, according to Article 38 of the Declaration, this organization and its organs “shall adopt all necessary measures to promote the full observance, protection, and application of the provisions contained in this Declaration, and shall endeavor to ensure their efficacy.” No member state objected to this Article. Two of the most important provisions of the Declaration, Articles 3 and 4, recognize indigenous peoples’ right of self-determination and self-government. Sadly, this organization’s current rules of participation do not meet these standards and, as a result, the permanent participation of indigenous governments is not guaranteed. A discussion on this same topic is currently taking place at the United Nations as a result of the World Conference on Indigenous Peoples. We hope the OAS will seek to do the same, to ensure that the voices of indigenous governments are permanently included at the OAS to contribute to good global governance and the implementation of the Plan of Action.
Madam/Mister Chair:
I cannot end my statement without referring to the threats, evictions, criminalization, and killings of indigenous leaders in almost every country represented here. We call upon states to uphold the Declaration and to collaborate with indigenous peoples to put an end to the criminalization, persecution, and killings of indigenous leaders. Our efforts here mean very little if we cannot work to guarantee that indigenous peoples live free from all forms of violence.
I look forward to discussing further how we can work together toward achieving the full implementation of the Plan of Action in a forceful, sustained and more inclusive manner.
Thank you.