The report, “Ending Violence So Children Can Thrive” by the Advisory Committee of the Attorney General’s Task Force on American Indian and Alaska Native Children Exposed to Violence, finds that American Indian and Alaska Native children are burdened with increased rates of altered neurological and physical development, poor school performance, substance abuse, and disproportionate representation in the juvenile justice system.  Chronic exposure to violence also causes these children to “experience post-traumatic stress disorder at the same rate as veterans returning from Iraq and Afghanistan, and triple the rate of the general population.”

The report’s findings are staggering, prompting the Senate Committee on Indian Affairs to convene an Oversight Hearing, “Protecting our Children’s Mental Health: Preventing and Addressing Childhood Trauma in Indian Country,” on November 19, 2014. 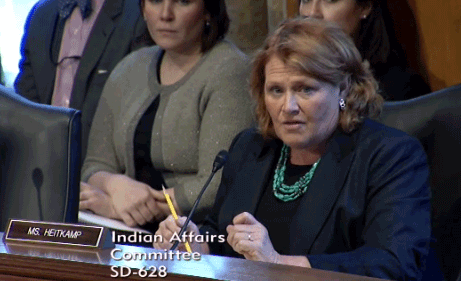 “If we, the powerful government of the United States, cannot protect the poorest, most disenfranchised and most vulnerable of all people, then we are not worthy of the seats we are sitting in,” said Senator Heidi Heitkamp (D-ND).  “This effort to end violence will be among my highest priorities.”

On the day after the hearing, November 20, Senator Heitkamp brought together experts and advocates, policy makers and federal agency officials, to identify ways to lessen the impact of the traumatic stress that American Indian and Alaska Native children experience.  “The scars of exposure to violence and traumatic events run deep in our tribal communities, particularly for our Native American children,” said Heitkamp.  “These wounds hinder our children’s ability to thrive, and they reverberate throughout communities – manifesting in cyclical abuse, addiction, poverty and crime.”

The report includes 31 recommendations to serve as a comprehensive “blueprint” for addressing the crisis American Indian and Alaska Native children face.  The report stresses that implementation should be driven by three core principles – empowering tribes, removing barriers, and providing resources.  According to Attorney General Eric Holder, “We must understand these impacts [of high levels of exposure to violence] so we can pursue policies that bring meaningful change.”
Importantly, the report proposes that tribes be authorized to criminally prosecute non-Indians who sexually and physically abuse American Indian and Alaska Native children within Indian country.  “We must continue to work toward fixing discriminatory and systemic barriers in United States laws that threaten the safety of our Native communities, particularly women and children,” said Jana Walker, senior attorney and director of the Indian Law Resource Center’s Safe Women, Strong Nations project.
The Violence Against Women Reauthorization Act of 2013 (VAWA 2013) restored limited criminal jurisdiction to tribes to prosecute non-Indians who commit domestic violence, dating violence, or violate a protection order; but children, and nearly all Alaska Native women, were left out of VAWA 2013.  The report therefore recommends that Congress restore tribal authority over all persons who commit crimes against American Indian and Alaska Native children in Indian country. 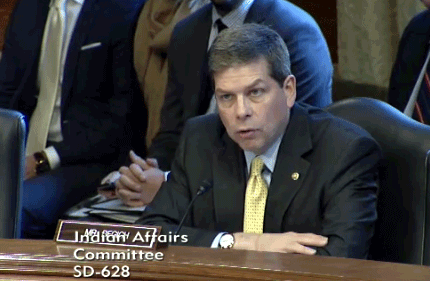 The report also recommends amending barriers in VAWA that exclude Alaska Native tribes from exercising the special domestic violence criminal jurisdiction.  “When we passed VAWA, Alaska Native people were left out.  All we want to do is fix it for all first peoples of this country,” said Senator Mark Begich (D-AK).

Currently, the State of Alaska treats Alaska Native tribes as largely lacking criminal jurisdiction, despite their struggle with the highest rates of violence in the country.  “Alaska exceptions about jurisdiction and federal law are really Alaska punishments… they are especially harmful to our children and that needs to stop.  It is unconscionable that Alaska Native people are not entitled to the same protections that American Indian people are entitled,” said Valerie Davidson, Committee member and Senior Director of Legal and Intergovernmental Affairs for the Alaska Native Tribal Health Consortium.  “We deserve better, and we must do better to end violence so children can thrive.”

The Senate Committee expressed its commitment to address this issue throughout the hearing. Senator Begich indicated he would seek the Senate’s unanimous consent on S. 1474, the Alaska Safe Families and Villages Act of 2014.  Section 9 of the Act would repeal the special rule for Alaska in VAWA 2013.  The Act would also encourage the State of Alaska to enter into intergovernmental agreements with Alaska Native tribes to support the enforcement of certain state and tribal laws and to enhance coordination and communication among law enforcement.