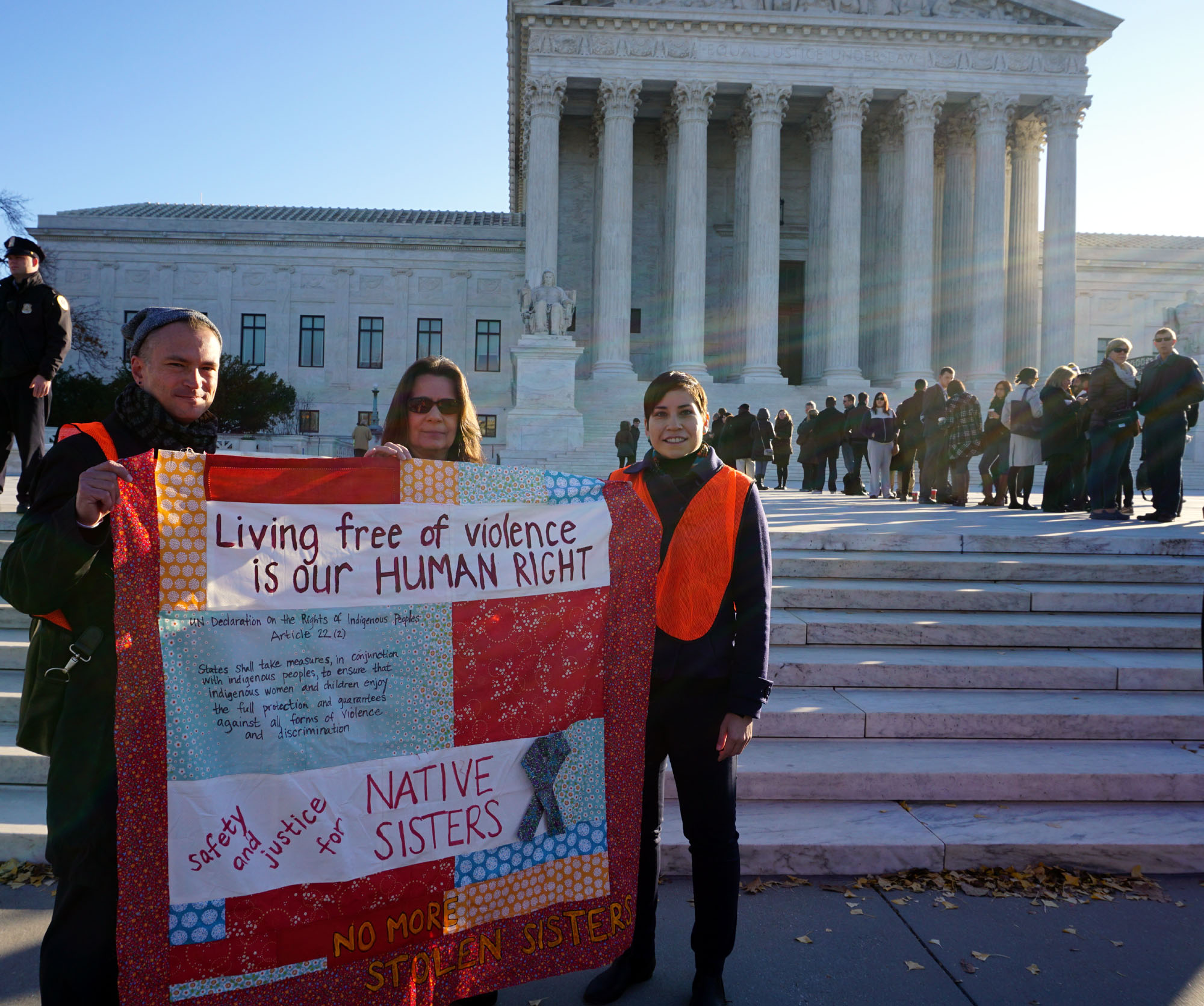 In the United States, we have had legislative victories like the passage of the Tribal General Welfare Exclusion Act, the Violence Against Women Reauthorization Act of 2013 and the subsequent repeal of its Section 910, which excluded Alaska Native Villages from key protections; all signs of improvement. Legislative advances like these do much to bring us closer toward achieving the objectives of the Declaration. Decisions this year by the courts to uphold the Bureau of Indian Affairs’ authority to take lands into trust for Alaska Native tribes in the Akiachak case, and to uphold tribal civil jurisdiction in the Dollar General case demonstrate further progress.

And yet, in the face of such progress, we have seen terrible human rights violations such as the violent attacks on peaceful water protectors opposing the Dakota Access Pipeline.

There are also new regional human rights standards now in place. On June 15, 2016, the Organization of American States, a regional intergovernmental body comprised of the 35 countries of North, Central, and South America, approved the long-awaited American Declaration on the Rights of Indigenous Peoples. Twenty-plus years in the making, this new document will guide the inter-American human right system in protecting the rights of indigenous peoples.

The Standing Rock Sioux, along with the Cheyenne River Sioux and Yankton Sioux tribes, will have a thematic hearing before the inter-American Commission on Human Rights on December 9, 2016, in Washington, D.C. This hearing will raise awareness about rights violations at Standing Rock and also force the United States to directly respond to tribal representatives and the Commission and other human rights experts.  It is important, however, to note that the United States has not yet issued a statement of support for the American Declaration, as it did for the UN Declaration. Tribal nations should consider urging the Obama Administration to issue a statement of support before January 20th.

The Standing Rock Sioux Tribe has already had some success reaching the UN about indigenous rights violations. In September,  eight independent UN experts called on the United States to halt construction of the pipeline and to consult in good faith with the affected tribes after Chairman David Archambault, II, traveled to Geneva, Switzerland, to make his case before the UN Human Rights Council.

The Standing Rock Sioux Tribe is an excellent example for all tribes on engaging and using international human rights mechanisms and instruments as tools to build support for their efforts to protect their people, lands, and water and effect positive change.

The Center is supporting  Indian nations to ensure indigenous governments have a permanent place at the United Nations, so they can voice their concerns and assert their rights more directly to the world. Following through on its commitments made at the World Conference on Indigenous Peoples in 2014, the UN will host four rounds of consultations with indigenous governments and member states (countries) to determine how to enable their participation at the UN. The first consultation is happening December 14-15, and the next three are set to take place January 30-February 1, February 27-28, and sometime between April 24-May 5, 2017. It is vital that indigenous governments speak for themselves, propose improvements to the UN system, and exchange views directly with other indigenous peoples and member states. The time is now for tribes to get involved with this important work. The consultations will shape how indigenous governments are able to participate in the UN for years to come, how they will be able to safeguard their rights, curtail violations, and take their place once again in the world community of nations.

We encourage tribes to engage in this process and welcome the opportunity to support their efforts. For more information about our work visit www.indianlaw.org/wcip.