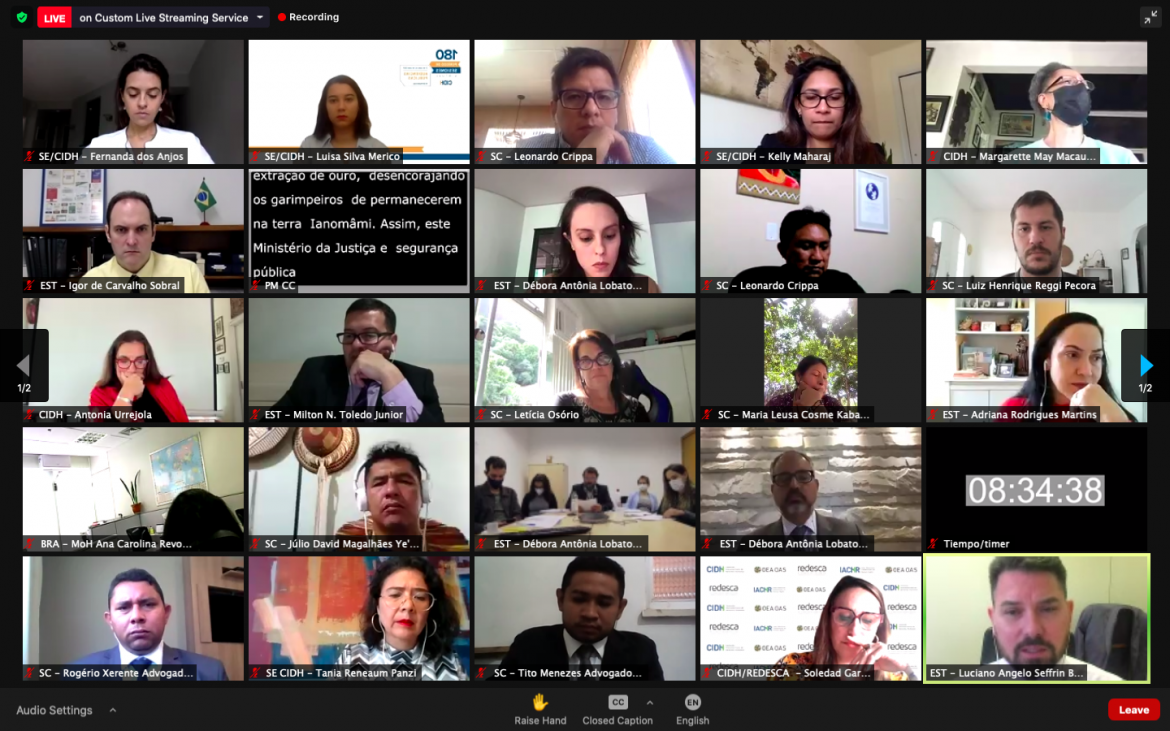 (WASHINGTON, DC – July 1, 2021) COIAB's legal advisor, Eloy Terena, and indigenous leaders Alessandra Munduruku, Dario Yanomami, Maria Leusa Munduruku, and Júlio Ye'kwana, testified at a hearing held by the Inter-American Commission on Human Rights (IACHR, or the Commission) to denounce the serious situation of invasions and violence in their Indigenous Territories. The escalation of violence in Indigenous Territories having tragic consequences, which is why indigenous leaders of the Amazon are once again alerting the world community about the risks to life, health, and safety that communities and villages in the Amazon are confronting.

The hearing addressed Brazil’s failure to comply with and enforce the Precautionary Measures granted by the IACHR in response to the violation of the rights of the Yanomami and Ye'kwana peoples, the Guajajara peoples, and the Munduruku peoples. The Precautionary Measures mechanism allows the IACHR a rapid response to serious and urgent situations of imminent risk that may cause irreparable harm to individuals or groups of persons among the 35 OAS member states, including Brazil.

Even after the Commission issued the Precautionary Measures, there has been an escalation of conflicts due to the increase in invasions of Indigenous Territories, which seriously threatens the lives, physical integrity, and health of indigenous peoples, in addition to harming the environment. In the Yanomami and Munduruku Indigenous Territories, the situation is dire. There is an imminent risk of massacres of indigenous people, at the level of genocide!

The violence and threat to the lives and physical integrity of members of the Munduruku peoples make it urgent that the IACHR calls on the Brazilian State to take immediate measures to protect these indigenous people against the expansion of the mining and, consequently, the spread of COVID-19, with transparency and in coordination with the Munduruku and their representatives.

The Guajajara and Awá Guajá peoples are experiencing an emergency situation that pre-dates the pandemic but is now aggravated by it. Illegal actions by loggers, squatters, hunters constantly put indigenous lives at risk, and they are extremely vulnerable due to the absence of effective actions and policies to confront their situation. There is ample evidence of threats, murders, and violence, especially towards leaders who are on the front line of protecting their territory.

The Yanomami and Ye’kwana leaders of Yanomami Indigenous Territory have been systematically alerting public bodies about the damage caused by the garimpeiro[1] invasion—the harm to their health, safety, and physical integrity. With the COVID-19 pandemic, these invasions have gained a new impetus, leaving indigenous people even more vulnerable. Additionally, there has been an increase in armed conflicts. The alerts from the communities and the succession of events over the last year attest to a scenario at the risk of genocide. Faced with the inaction of the local government bodies responsible for maintaining their safety, and left alone to defend themselves from armed attacks, the Yanomami and Ye’kwana are constantly asking for help and to be heard.