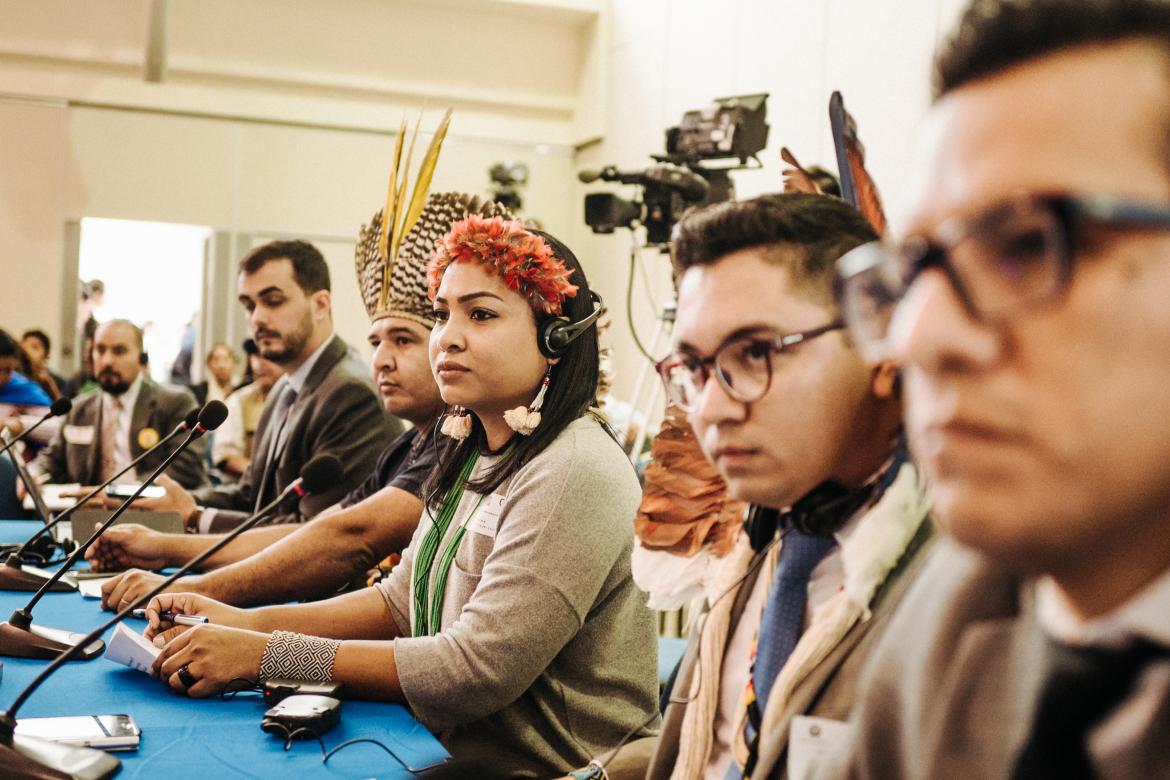 SUCRE, BOLIVIA – On Wednesday, February 13, 2019, the Inter-American Commission on Human Rights convened a public hearing in Sucre, Bolivia in order to discuss the human rights situation of indigenous peoples in Brazil. During the hearing, the Articulação dos Povos Indígenas do Brasil (APIB), the Coordenação das Organizações Indígenas da Amazônia (COIAB), and the Articulação dos Povos e Organizações Indígenas do Nordeste, Minas Gerais e Espirito Santo (APOINME) and the Indian Law Resource Center (the Center) denounced the government of Jair Bolsonaro for his policies that endanger the human rights of indigenous peoples. The delegation of organizations also informed the Commission about the increasing violence towards indigenous communities since the 2018 presidential elections.

The organizations emphasized the well-known statements Bolsonaro has made against indigenous communities in which he compared indigenous peoples living on reserves to zoo animals and promised that, if elected, not a centimeter of land would be demarcated for indigenous and quilombo communities.

The information presented to the Commission hinted that Bolsonaro is currently fulfilling his campaign promises. First, by means of Provisional Measure 870 and Decrees 9660 and 9667, Bolsonaro created a series of measures meant to hinder the demarcation process of indigenous lands. In addition, Bolsonaro separated the Fundação Nacional do Indio (FUNAI) from the Ministry of Justice, as it has existed since 1991, and instead linked it with the Ministry of Family, Women, and Human Rights, which until 2018 was called the Ministry of Human Rights. He also withdrew FUNAI’s jurisdiction of demarcating indigenous lands, as well as the formulation, coordination, and supervision of the actions and guidelines on environmental licenses affecting the lands of indigenous and quilombo communities.

Another governmental body that suffered changes under Bolsonaro is the Conselho Nacional de Política Indigenista (CNPI). CNPI, an advisory body, is responsible for the preparation, accompaniment, and implementation of public policies aimed at indigenous communities. CNPI was created by Decree No. 8,593 as of 17 December 2015 and consists of 45 members: 15 representatives from the Federal Executive branch, all with voting rights; 28 representatives from indigenous communities and organizations, with 13 voting rights; and two representatives from indigenous entities, with voting rights. The CNPI was also transferred from the Ministry of Justice to the Ministry of Family, Women, and Human Rights.

Luiz Henrique Eloy, a lawyer for APIB and a member of the indigenous peoples of Terena, stressed that these changes occurred without free, prior, and informed consultation procedures as required by the International Labour Organization Convention 169, the American Declaration on the Rights of Indigenous Peoples, and the jurisprudence of the Inter-American Court of Human Rights. Eloy also emphasized that these “alterations made by the Brazilian state put the demarcation of indigenous lands in the hands of agribusiness, historical enemies of Brazilian indigenous peoples.”

In reference to the demarcation of indigenous lands in Brazil, Angela Kaxuyana, member of COAIB and member of the Kaxuyana indigenous peoples, stated that “the Brazilian state has not taken any action to demarcate the 537 lands claimed by indigenous peoples, which amounts to 41% of the country's total indigenous lands.” She also noted that while this hearing before the Commission was being developed, Ministers Gustavo Bebianno (Secretary General of the President), Ricardo Salles (Ministry of the Environment) and Damares Alves (Ministry of Family, Women, and Human Rights) conducted a visit in loco to Zoé, an indigenous community recently contacted. The visit aimed to discuss the resumption of the Calha Norte project, a project by the government of José Sarney to fix the military presence in the Amazon.

George de Vasconcelos of the Pankararu indigenous people and Coordinator of APOINME emphasized the violent attacks that his people have suffered by invaders who are pursuing the possession of Pankararu lands in spite of a firm judicial decision adopted in 2010 by a court in favor of the Pankararu peoples. According to Vasconcelos, “on the day of the election of Bolsonaro, indigenous lands of the Pankararu peoples in the municipality of Jatobá, Pernambuco, was attacked and both a health center and a school attended by members of the community were burned.”