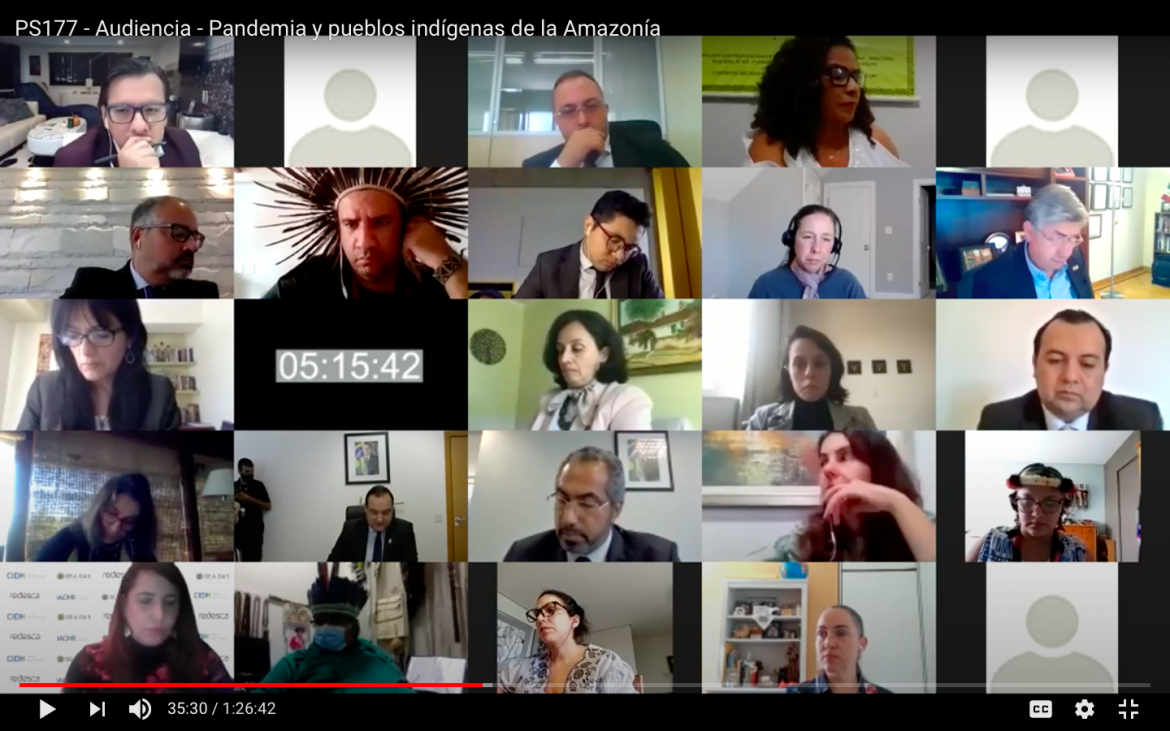 On Tuesday, October 6, 2020, the Articulação dos Povos Indígenas do Brasil (APIB), in conjunction with the Coordenação das Organizações Indígenas da Amazônia (COIAB) and the Indian Law Resource Center, denounced the main violations committed against the rights and lives of indigenous peoples that have occurred in the past seven months of the Covid-19 pandemic during a thematic hearing convened by the Inter-American Commission on Human Rights (IACHR). The hearing, which dealt with the impacts of the coronavirus on indigenous peoples in Brazil, took place within the framework of the IACHR’s 177th Period of Sessions. APIB and COIAB addressed the Bolsonaro administration’s role in aggravating human rights violations during a public health crisis.

As of September 2020, more than 50% of Brazil’s indigenous peoples were directly affected by the new coronavirus. It is an alarming situation that worsens each day, because, in addition to the threat of the virus, indigenous peoples confront racism, illegal deforestation, agribusiness, land grabbing and many other crimes that continue to advance into their territories.

For APIB, the federal government has been the main vector for spreading the new coronavirus among indigenous peoples, whether due to the lack of attention or by direct actions that encourage increases in crimes in indigenous territories. For example, actions of the current President and high-ranking representatives of the federal government during this global humanitarian and health crisis include speeches laden with racism and hatred, as well as decrees, provisional measures, and bills that seek to legalize crimes and diminish the constitutional rights of indigenous peoples.

Data from the National Committee for Indigenous Life and Memory, a database created by APIB to monitor coronavirus cases, indicates that 828 indigenous people died from Covid-19 and another 33,412 were infected, affecting 158 peoples in total. In fact, Covid-19 deaths among Brazil’s indigenous peoples is greater than the total number of deaths of the general population in six countries in South America.

As of May 2020, the current government certified 114 farms in Brazil’s land management system, Sigef, which cut through stretches of non-demarcated indigenous lands. Together, these farms occupy more than 250,000 hectares of indigenous lands. This crime of land invasion is openly encouraged by the federal government in the midst of the pandemic.

With the largest number of infected indigenous peoples, the Brazilian Amazon is the most impacted region. The states most affected were Amazonas, Mato Grosso, Pará, and Roraima.

The first confirmed case of Covid-19 among indigenous peoples demonstrates that the Bolsonaro government is primarily responsible for the entry of the virus in many territories. For example, the lack of protocols from the Special Secretariat for Indigenous Health (SESAI) caused a health agent assigned to the Kokama people to become infected on March 25, in the municipality of Santo Antônio do Içá, in the state of Amazonas. The infection was traced to a doctor from São Paulo, who was infected with the virus, that traveled to the municipality at the request of SESAI. The Alto Rio Solimões region, where this first case occurred, has the majority of confirmed cases and deaths among indigenous peoples. The Kokama people, who have many communities in this region, have the second highest number of deaths registered in Brazil with 58 deceased relatives.

Apib’s participation in the IACHR’s 177th Period of Sessions is part of an effort aiming to denounce the Brazilian government and demand the fulfilment of its constitutional responsibility to protect indigenous peoples.