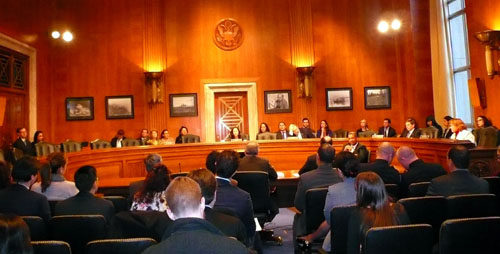 The United States Senate Committee on Indian Affairs conducted an oversight hearing on Feb. 12, 2014, on the recently released Indian Law and Order Commission (ILOC) report, “A Roadmap for Making Native America Safer.” The report calls for tribes to exercise full authority over non-Indians and for Alaska tribes to exercise jurisdiction over their own lands.

In total, the report makes 40 recommendations to the President and Congress in six areas: Jurisdiction, Tribal Justice, Reforming Justice for Alaska Natives, Juvenile Justice, Detention and Alternatives, and Intergovernmental Cooperation.

“The issue is a failed federal system,” said Troy Eid, chairman of the ILOC. “The Commission found that throughout history, and continuing today, federal policies have displaced and diminished tribal institutions that are best positioned to provide trusted, accountable, accessible and cost-effective justice in tribal communities.”

The Commission highlighted the need to recognize that “Alaska’s criminal justice crisis is a national problem.” Tamra Truett Jerue, Director of Social Services and tribal administrator of the Anvik Tribe, travelled more than 3,500 miles to Washington, D.C., to testify before the Senate Committee. “We have a right to command the same rights for daily protection you all have,” she said. The Commission made several recommendations to improve justice for Alaska Natives, including the repeal of Section 910 of the Violence Against Women Reauthorization Act of 2013 (VAWA 2013), in order to allow Alaska Native Nations to exercise full civil jurisdiction to issue and enforce protection orders in cases of domestic violence.

Sen. Mark Begich (D-AK) explained that an amendment to VAWA 2013 to permit Alaska Native nations to issue and enforce domestic violence protection orders exists in the Alaska Safe Families Safe Villages Act (S. 1474). The bill was introduced in August 2013. Kevin Washburn, Assistant Secretary-Indian Affairs, Department of the Interior (DOI), and Timothy Purdon, U.S. Attorney (District of North Dakota), Department of Justice (DOJ), both testified that their Departments support the repeal of Section 910 of VAWA 2013 because “all tribes have an interest in public safety.” If enacted, the Alaska Safe Families Safe Villages Act would also make participating Alaska Native nations eligible for the same tribal court and law enforcement programs as tribes in the lower 48.

The Commission recommended that tribal governments have the option to opt out of federal and/or state criminal jurisdiction, either fully or partially, and from the sentencing limits of the Indian Civil Rights Act. According to Chairman Eid, this would “also acknowledge tribal criminal jurisdiction over all individuals who commit offenses within Indian country” subject to limited review of alleged violations of constitutional rights by a new United States Court of Indian Appeals. The Commission additionally called on the President and Congress to close Indian country’s public safety gap through funding parity, in part by establishing a permanent, recurring base funding system for tribes exercising fuller criminal jurisdiction. Another recommendation identified the need to consolidate those justice services and programs for Indian country that are currently administered by the DOI within the DOJ.

Sen. John Barrasso (R-WY), Senate Committee Vice Chairman, drew attention to the Commission’s troubling findings that Native American youth are overrepresented in the juvenile justice system and receive harsher sentences. The ILOC report, one of the first comprehensive policy assessments of Native juvenile justice, called for the transfer of juvenile cases, except violent offenses and specified drug offenses, to tribal courts, and recommended block funding for tribes to allow them to allocate spending based on their specific needs for detention or treatment. U.S. Attorney Purdon agreed that long-term improvement of public safety in Indian country involves working with Native youth on preventative measures to break the cycle of violence and hopelessness.

Assistant Secretary Washburn agreed that “public safety is more than simply law enforcement. … We can’t prosecute ourselves out of criminal problems on reservations." He testified that a new, broader approach is needed, noting that there are efforts underway to support tribal services to prevent offending and recidivism and to provide tribes with the resources necessary to deal with substance abuse and related issues.

ILOC Commissioner, Affie Ellis, described the challenges and successes identified by the Commission. She noted the many challenges tribal governments face, especially the need to rebuild internal capacity, and stressed that tribal governments must lead efforts to strengthen tribal justice because many are already taking successful steps to ensure public safety in their communities: “When we were out in the field, we saw some bright spots. . . . When the Commission saw areas where things were working, the Commission heard over and over ‘look at what we are doing.’ . . . Never did we hear ‘look at what other people, the federal government, is doing for us.’”