On July 14, 2011, the Senate Committee on Indian Affairs convened a long overdue oversight hearing on “Native Women: Protecting, Shielding, and Safeguarding Our Sisters, Mothers, and Daughters.”  In support of efforts to inform the Committee on the epidemic of violence against Native women, the Indian Law Resource Center submitted written testimony to be included in the hearing record. 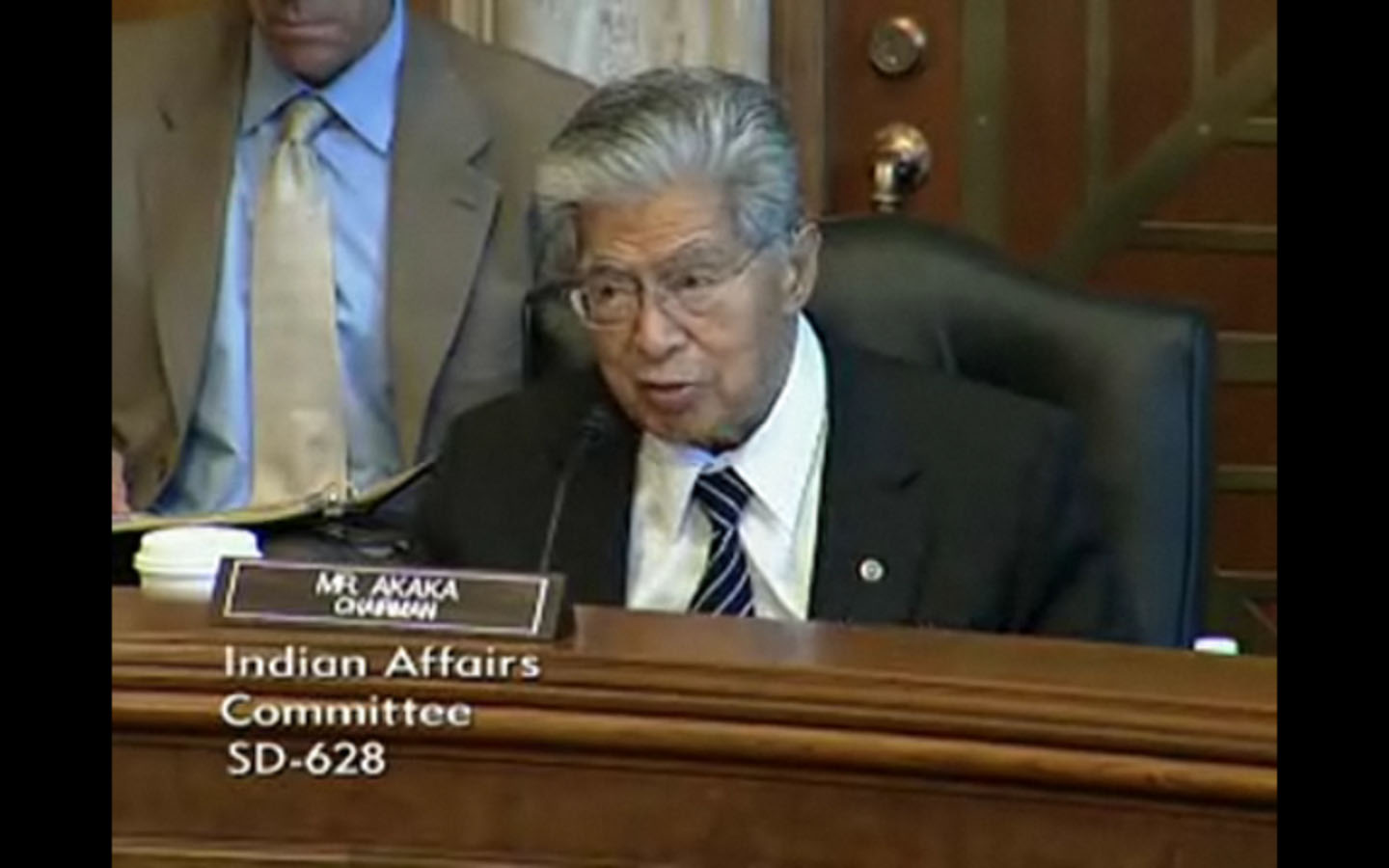 Chairman Daniel Akaka (D-HI) began the hearing with a chilling public service announcement from Minnesota called “When I Grow Up,” which focused on ensuring that Native girls will not be plagued by current rates of domestic and sexual violence as adults.  Four other Senators attended the hearing:  Vice Chairman John Barrasso (R-WY), Senator Al Franken (D-MN), Senator Lisa Murkowski (R-AK), and Senator Tom Udall (D-NM).  The hearing consisted of three panels.  On the first panel was Tom Perrelli, Associate Attorney General for the Department of Justice (DOJ), and Rose Weahkee, Director for the IHS Division of Behavioral Health.  Panel two was composed of the Honorable Donald W. Rodgers, Chief of the Catawba Indian Nation in South Carolina; Carmen O’Leary, Director of the Native Women's Society of the Great Plains in South Dakota; and Sherry Sanchez Tibbetts, Executive Director of the American Indian Community Housing Organization.  Finally, panel three consisted of Mickey Peercy, Executive Director of Health Services of the Choctaw Nation of Oklahoma, and Sarah Deer, Assistant Professor at William Mitchell School of Law and Amnesty International USA’s Native American and Alaska Native Advisory Council Member.

Senate Judiciary Committee Hearing on “The Violence Against Women Act: Building on Seventeen Years of Accomplishment”

Senator Franken noted that the Senate Judiciary Committee held a hearing on the Violence Against Women Act (VAWA) on July 13, 2011.  Senator Franken, among others, called for VAWA to be updated to better protect and provide services for victims of violence.

Tom Perrelli, Associate Attorney General for the DOJ, focused heavily on the need for a Congressional jurisdictional fix.  He noted that, in some communities, the murder rates of Native women are ten times the national average.  Based on this startling statistic, Mr. Perrelli stated that protecting Native women is a high priority for the DOJ and that one of the best ways to protect Native women is by empowering tribal governments, police, and courts.  Mr. Perrilli emphasized that tribes’ lack of jurisdiction over non-Indians is a major problem.  Overall, he noted three major gaps in the current system.  First, the current patchwork of federal, tribal, and state jurisdiction in Indian country needs to be addressed.  He asserted that “new Federal legislation could recognize certain tribes’ power to exercise concurrent criminal jurisdiction over domestic-violence cases, regardless of whether the defendant is Indian or non-Indian.”  Second, he appeared to be referencing Martinez v. Martinezwhen he said at least one federal court has ruled “that tribal courts have no authority to issue or enforce protection orders against non-Indians who reside on tribal lands.”  Finally, he pointed out that federal criminal law is not parallel with state laws (i.e., many states have developed laws recognizing graduated sanctions for escalating conduct in domestic violence cases).  He suggested that federal legislation needs to be passed that more closely matches such state legislation.  Mr. Perrelli opined that the heightened sentencing provisions  of the Tribal Law and Order Act (or TLOA) are a good start toward improving the current system, but much more needs to be done.

When asked by Chairman Akaka what steps need to be taken regarding tribal criminal jurisdiction, Sarah Deer presented two:  First, sentencing limits need to be addressed.  While TLOA increases sentencing, the maximum sentence for a child rapist is still only about three years.  For some, this creates a deterrent to reporting such crimes because rapists spend little time in prison and may soon come back to terrorize the victim.  Second, Ms. Deer addressed the United States Supreme Court decision in Oliphant, which held tribes lack criminal jurisdiction over non-Indians, stating that Congress needs to restore tribal criminal jurisdiction over non-Indians.

As the Director of the IHS Division of Behavioral Health, Rose Weahkee focused heavily on IHS services. She addressed numerous provisions of TLOA that apply to the IHS’s handling of domestic violence cases.  For example, in accordance with TLOA, the GAO will publish an upcoming report on IHS’ collection of forensic evidence.  When Senator Murkowski asked about how the IHS plans to address problems relating to the collection of such evidence, Weahkee said that the IHS is focusing on proper evidence collection training.

Senator Franken quoted an article by Amnesty International regarding IHS’s improper handling of rape kits.  According to the article, while IHS’ services are free, some Native women who have gone to non-IHS facilities have been charged for their rape kits.  Often, Native women have never received reimbursement because the reimbursement policy is complex.  Ms. Weahkee noted that, in response, the IHS recently established a policy that requires the IHS to provide full reimbursement.  Senator Franken also noted that he is currently in the process of attempting to pass legislation that would provide funds so no woman would have to pay for a rape kit.

Sherry Sanchez Tibbets discussed the closure of many Minnesota domestic violence shelters due to national budget cuts.  Now that the Minnesota government has shut down, even more domestic violence shelters are in trouble.  Two shelters in the Twin Cities alone have closed.  Ms. Tibbets explained that homeless shelters are not an adequate substitute for domestic violence shelters because the staff is often not trained to deal with these cases.  Having adequate housing for domestic violence victims is especially important because it removes them from the location of their abuser.  She also had three recommendations for the Committee.  First, more culturally appropriate housing needs to be developed, especially in urban areas.  Second, more training and technical assistance is needed for mainstream programs to help identify trafficking victims and to provide culturally aware services.  Third, the law enforcement certification requirement for domestic sex trafficking victims to qualify for services funded by federal dollars needs to eliminated.

Carmen O’Leary asserted that domestic violence services need to be continually funded and supported.  Inconsistent funding of services creates a dangerous situation for women; grants with terms greater than two or three years are needed for these programs.

Sex trafficking was discussed frequently throughout the hearing.  Senator Murkowski first breached the subject in her opening remarks.  She noted that there is a growing level of sex trafficking amongst Native women in Alaska.  Sarah Deer, along with witness Sherry Sanchez Tibbetts, were involved with the Minnesota Indian Women’s Resource Center’s2003report “Shattered Hearts.” Ms. Deer confirmed concerns about sex trafficking with deeply disturbing statistics.  She is currently in the process of finishing another report that will be out in October, which focuses on trafficking and prostitution in Minnesota.  Of the 105 women who were interviewed, Deer said that 2/3 had been used for sex by up to 300 men.  The women in the study also reported that “70 percent of the women they knew in prostitution had been lured, tricked or trafficked into it.”

As one possible way to address sex trafficking, Senator Murkowski asked Mr. Perrelli whether it would be beneficial to create a law that would make it a crime—similar to one under the Mann Act—to transfer a minor from a Native village or reservation to another part of the state for the purpose of committing a sex act, even if the act is entirely intrastate.  Mr. Perrelli, responded that a new law is not necessary because, under current law, a person does not actually need to be physically trafficked and moved over state borders to constitute a crime, the act just needs to affect interstate commerce to be illegal.

Senators and witnesses also noted the cyclic nature of domestic violence.  Children experiencing domestic violence in the home often grow up to be abusers.  Chief Don Rodgers provided moving personal testimony.  He noted that when he sees his daughter playing with his nieces, based on rape statistics, “one of those children will face this.” Chief Rodger is a survivor of domestic violence, which he witnessed as a child.  He testified that the psychological ramifications on a child can result in one of two things happening: “it can turn you into a perpetrator or it can turn you into a domestic violence advocate.”  Chief Rodger’s story highlighted how violence against Native women does not impact just women, but their children and communities as well.

To read testimony from the witnesses at the hearing or to watch a replay of the hearing online, visit http://indian.senate.gov/.  A copy of the testimony submitted by the Indian Law Resource Center for inclusion in the hearing record is available here.