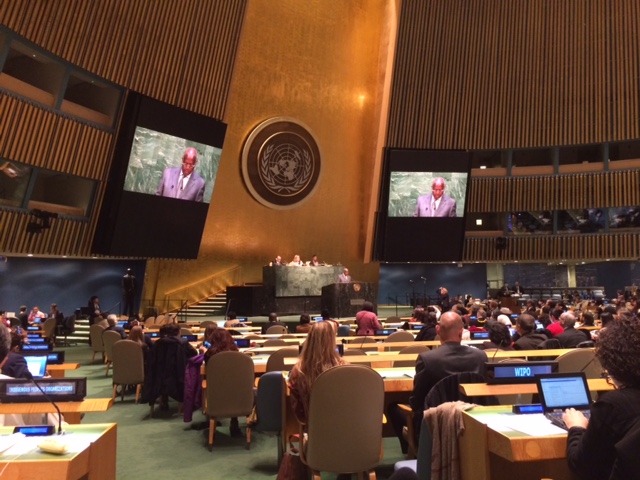 The clock is ticking for UN leaders to develop a system-wide action plan to fulfill the mandates outlined in the 2014 World Conference on Indigenous Peoples outcome document.  The outcome document includes three specific areas championed by tribal leaders that require further UN action: the creation of an implementing and monitoring body for the UN Declaration on the Rights of Indigenous Peoples, enhanced participation for indigenous governments in the UN, and actions to combat violence against indigenous women.

The Secretary-General is expected to submit a report and recommendations on a UN system-wide action plan to coordinate and implement the UN Declaration on the Rights of Indigenous Peoples this fall.  Additionally, the outcome document from the World Conference tasks the Secretary-General with also submitting recommendations for achieving an implementing and monitoring body for the UN Declaration, as well as proposals to enable the participation of indigenous governments in the UN.

“So far, the only mechanism for indigenous input to the report and recommendations has been a questionnaire circulated by the Permanent Forum,” says Karla General, an attorney and the project lead for the Center’s work to follow up on the decisions of the World Conference. “We’ve been trying to create more openings for indigenous input and consultation in the planning processes – as promised by the UN in the outcome document.”

Much remains unclear, but what is understood so far is that the report and recommendations will be considered by the Economic and Social Council (ECOSOC) in July before going to the General Assembly in September or October. The Secretary-General's report and recommendations may also be considered by the Expert Mechanism on the Rights of Indigenous Peoples in July and the Human Rights Council in September. Ultimately, countries will decide both the form and mandate of the implementing body and the process of accreditation, including any enhanced participatory rights, for indigenous governments in the UN. The outcome document calls for these decisions to be made during the 70th Session of the General Assembly, which will begin September 15, 2015.

To inform the report and recommendations of the Secretary-General, several tribal leaders and representatives participated in the Permanent Forum on Indigenous Issues held April 20-May 1 in New York. Through a written joint statement (endorsed by 90 indigenous nations and 21 organizations in the Americas) we urged the inclusion of indigenous peoples’ views and comments in the Secretary-General’s report and offered concrete proposals about the implementing and monitoring body for the UN Declaration, the new status for indigenous governments in the UN, and actions to combat violence against indigenous women.  Although the statement was not able to be read during the Forum because of time limitations,  it was formally submitted to the Forum’s Secretariat and the statement and related proposals were shared widely among other indigenous peoples, UN officials, and countries before and during the session and with United States representatives at a separate meeting at the USUN Mission.

During the Permanent Forum, the United States was one of just a handful of countries to offer any detailed proposals on the implementing and monitoring body and enhanced participation for indigenous governments in the UN.

“We’re very happy to see the United States engaging in the process,” says General, “but there are serious concerns with their view that indigenous participation should be limited to select UN bodies and with their lack of detail about the form and mandate of the implementing body at this late stage.” What General does welcome is the United States’ proposal to have ECOSOC establish a consultation process involving indigenous peoples, member states, and UN officials to share and coordinate proposals in the next month or so. “This would provide  a key opportunity for indigenous peoples, their governments and representatives, to share ideas and gain support from countries for the implementing body and for enhanced participation of indigenous governments.”

The Outcome Document represents a commitment by the UN and member states to ensure the promise of the UN Declaration is not lost.  The Center remains actively involved in monitoring the priorities expressed by indigenous leaders.  Now is the time to turn decisions achieved at the World Conference into meaningful and lasting outcomes. We need your help and support to continue this important work. Please consider a donation to the Center today.