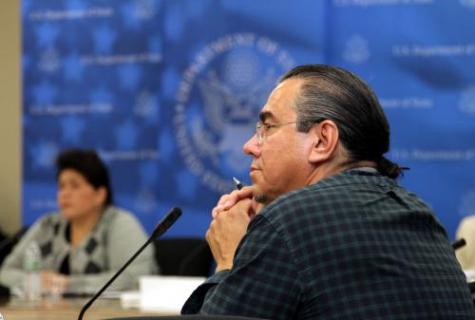 WASHINGTON, Oct 15, 2010 (IPS) - Just over three years after having voted against it at the United Nations, the United States is in the process of reviewing its position on the U.N. Declaration on the Rights of Indigenous Peoples.

The declaration lays out the fundamental rights and freedoms of the world's indigenous peoples, although it is not legally binding. It was originally opposed by just four countries – the U.S., Canada, Australia and New Zealand. The latter two have since reversed their positions and, in March, Canada announced its intention to change its position. Around the same time, the U.S. also decided to undertake a review of its position.

The process of that review has been ongoing since then, but it heated up a bit this week in Washington, where a series of meetings between U.S. indigenous leaders, government officials and NGOs took place as the period of public input on the U.S.'s review winds down.

Robert Coulter, who participated in the drafting of the original declaration over 20 years ago and is now executive director of the Indian Law Resource Center, an American Indian law and advocacy organisation, took part in the meetings Thursday.

Though he says the officials present would not divulge any concrete information on whether the U.S. will endorse the declaration nor when a final decision might be made, he did see an exceptional level of interest on the part of the U.S. government, with officials from numerous agencies present.

"They have been discussing the thing with us for over 20 years in Geneva, but this kind of consultation process is somewhat extraordinary," he told IPS Thursday. "The White House appears to be genuinely committed to the policy of consultation with indigenous leaders on all things but particularly on this."

The U.S. State Department, which is overseeing the review process, says President Barack Obama's administration was urged in 2009 by tribal leaders and other stakeholders to reexamine the U.S. position. On Apr. 20, the country's ambassador to the U.N., Susan Rice, announced they would do just that.

The review, the State Department said in a statement Thursday, "reflects [the Obama administration's] understanding of the importance of this document for many around the world and is consistent with President Obama's call for a new era of U.S. engagement globally."

Three consultations with U.S. indigenous leaders have taken place as part of this process, with Thursday's three-hour session marking the final one. Friday, NGO leaders and other stakeholders were having a consultation of their own at the State Department.

Coulter says this sort of careful, inclusive process is normal when the U.S. is considering supporting an international agreement, but, when it comes to indigenous issues, "We've never seen anything like this."

The declaration received overwhelming support from U.N. member countries when it went before the General Assembly in 2007, with 144 states voting in favour and only those four – notable because of their historical mistreatment of indigenous populations – voting against. Another 11 countries abstained, though two of those, Colombia and Samoa, have since endorsed it.

As a legally non-binding treaty, the declaration is seen mainly as a way to affirm the rights of communities whose rights have historically and repeatedly been violated. Many also see it as a way to help end discrimination and the exploitation of indigenous land without informed prior consent.

If the U.S. were to change its position and support the document, Coulter hopes the move will at least set a framework for discussing these issues.

"We know that this is not a binding instrument but that it is a serious instrument about human rights and that it will in effect set an agenda about the kinds of discussions and changes that have to be worked out in the future," he says. "It's an agenda for our future consultations about what improvements need to be made in U.S. law, what changes need to be made to fully respect our land rights.

"No one expects this to create any instant changes. The terms of the declaration could indeed be used in arguments or court cases, but courts are not obliged to apply the declaration," he adds.

In its comments to the State Department, the Indian Law Resource Center emphasised that the declaration would require no improvements to U.S. law concerning indigenous lands that are not already required by the U.S. constitution, and that the contentious principle of "free, prior and informed consent" included in the declaration would not give indigenous a people veto but, rather, require a process that must be followed before taking action that could be construed as an infringement of rights.

For its part, the State Department says it "recognises that for many around the world, the U.N. Declaration on the Rights of Indigenous Peoples provides a framework for addressing indigenous issues."

Coulter also hopes the review process currently underway marks the beginning of an ongoing consultation to strengthen and improve the relationship between Washington and native nations in its own territory, such as Alaska and Hawaii.

But the implications might go even beyond than that. Under the Obama administration the U.S. has increased its awareness of its own human rights record, and endorsing the declaration may be another milestone in that effort.

"The U.S. endorsement would be perhaps the first concrete step the U.S. has taken to follow through on its professed attention to once again be a leader in the field of human rights and to subject itself to human rights scrutiny and accountability," says Coulter.