Congressional Briefing on the Impact of VAWA 2013 in Indian Country 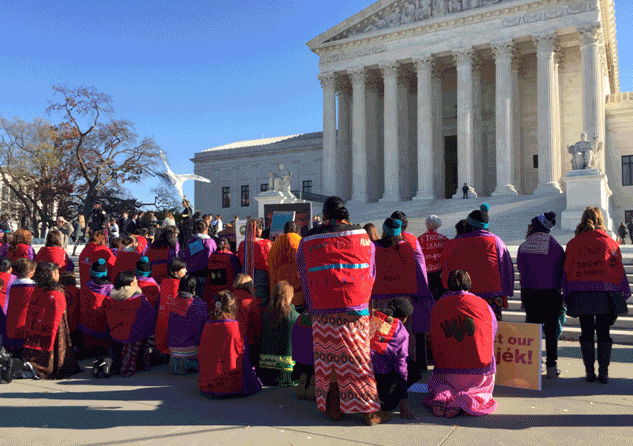 February 22, 2012| Washington, D.C. — The 2013 Violence Against Women Act affirmed tribes' ability to exercise special domestic violence criminal jurisdiction (SDVCJ) over non-Indian defendants within Indian country for domestic or dating violence against Native women, and violations of protection orders.  A congressional briefing, Violence Against Women and Implementation of VAWA 2013 Special Domestic Violence Criminal Jurisdiction, scheduled on Tuesday, February 23, 2016, from 2–3 p.m., in the Cannon Building Room 121, will give updates on tribal implementation of this life-saving legislation.

“It is now clear that the law should be expanded to protect additional victims and tribes across the Nation should be provided with the proper resources to implement the law,” said Peter Yucupicio, Pascua Yaqui Chairman. “Imagine if all tribes, including Alaskan Native communities had implemented VAWA 2013, thousands of additional victims would have been protected.”

As of January 1, 2016, eight tribes have implemented special domestic violence criminal jurisdiction over non-Indians under VAWA 2013. Together, the tribes have made 44 SDVCJ arrests, resulting in 18 guilty pleas, 5 referrals for federal prosecution, 1 acquittal by jury, 12 dismissals, with 6 cases pending.

The Pascua Yaqui Tribe began exercising SDVCJ on February 20, 2014, as part of the DOJ Pilot Project. As of September 1, 2015, the tribe has made 21 SDVCJ arrests involving 16 separate offenders, resulting in 6 guilty pleas, 4 referrals for federal prosecution, 1 acquittal by jury, and 10 dismissals. Pascua Yaqui reports that since it began implementing SDVCJ, cases involving non-Indians make up 25% of the tribe’s domestic violence caseload.

The Tulalip Tribes began exercising SDVCJ on February 20, 2014, as part of the DOJ Pilot Project. As of February 1, 2016, it had 11 SDVCJ arrests involving 9 defendants, resulting in 6 guilty pleas, 1 federal guilty plea, 2 dismissals, and 2 cases pending. The defendants have had a combined number of 109 contacts with Tulalip Tribal Law Enforcement since 2008.

“There is much work to be done to successfully implement this law. We have stretched our tribal resources and have engaged in advocacy for better access to national criminal databases and for children to be included under the umbrella of SCDVJ,” said Melvin Sheldon, Jr., Chairman Tulalip Tribes. “Every life is important and every victim’s voice should be heard.”

“The NIWRC’s mission is to end violence against Native women,” states NIWRC Board President, Cherrah Giles. “We know this violence won’t end if non-Indians who are beating and abusing our women are never held accountable. Our tribal governments under VAWA 2013 have the authority to do so, and through the experience of the tribes implementing special jurisdiction over non-Indians we are seeing how this jurisdiction is saving lives.”