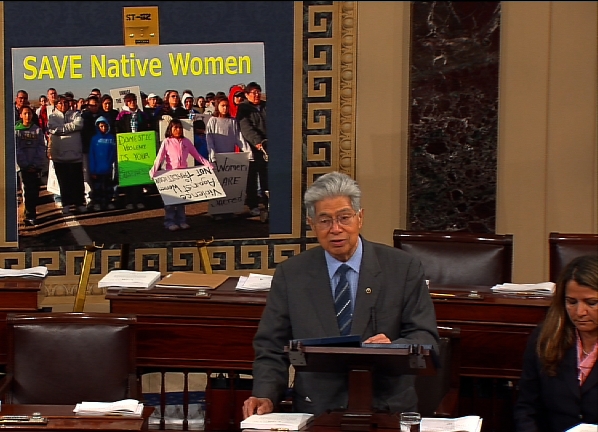 On April 26, 2012, the U.S. Senate passed S. 1925, the Violence Against Women Reauthorization Act of 2012, by a vote of 68-31.  The legislation is an historic move forward in protecting Native women from epidemic levels of violence.  The bill would restore concurrent tribal criminal jurisdiction over all non-Indians who commit misdemeanor domestic and dating violence, and violate protection orders.  It also strengthens the ability of federal officials to address violent felonies committed in Indian country.  “This bill’s tribal provisions address the epidemic rates of violence against Native women – by enabling VAWA programs to more directly and promptly respond to their concerns and needs,” said Senator Daniel Akaka (D-HI), Chairman of the Senate Committee on Indian Affairs.  Mr. Akaka also quoted a recently-released White House statement expressing strong support for the tribal provisions which would “bring justice to Native American victims” and cited a letter signed by fifty law professors and submitted to Congress last week expressing their “full confidence in the constitutionality of the legislation, and in its necessity to protect the safety of Native women.”

The Senate soundly rejected by a vote of 63-36 a substitute version of the bill offered by Senator Hutchison that would have stripped key tribal provisions in Title IX of the bill. This is a significant victory for all of Indian Country.  The bill now moves to the House.  The bill is scheduled for a mark up in the House Judiciary Committee on May 8, 2012, with a vote possibly taking place by mid-May.

TAKE ACTION by urging the House to support Title IX of S. 1925 without changes.