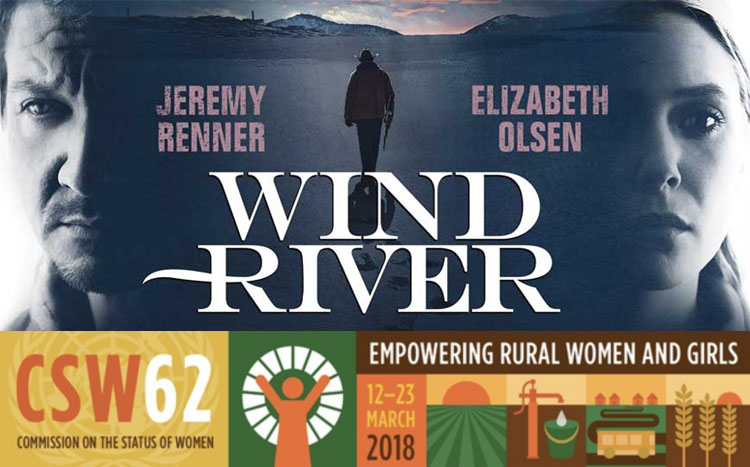 During the 62nd session of the UN Commission on the Status of Women, indigenous experts called for action to fix a legal system that too often leaves Native women, particularly those in rural America, unprotected from violence and sexual assault. The March 19 panel, part of the NGO-CSW62 Forum, took place along with a screening of select scenes from Wind River, a feature film written and directed by Taylor Sheridan that tackles the subjects of sexual assault and missing and murdered indigenous women.

“Wind River offers us a glimpse of the reality that so many Native women face, especially those living in rural and remote areas,” said Caroline LaPorte, Senior Native Affairs Policy Advisor for the National Indigenous Women’s Resource Center. “Native women experience violence at higher rates than other women, and barriers embedded in U.S. law and policy make it harder for them to get law enforcement to respond or to get prosecutors and the courts to act. It is a legal framework, rooted in colonization and genocide that was created to fail us.”

“Indigenous women in the United States, like indigenous women everywhere, have the right to live lives free of all forms of violence and discrimination,” said Chris Foley, an attorney with the Indian Law Resource Center. “Unfortunately, racial and gender-based violence are still too common, and the United States is failing to live up to its international human rights obligations.”

American Indian and Alaska Native women face violence at much higher rates than other women. Alaska Native women, for instance, suffer the highest rate of forcible sexual assault in the nation, and some villages report rates of domestic violence up to 10 times higher than in the rest of the United States, according to a November 2013 report by the Indian Law & Order Commission.

“Legal barriers prevent tribes from exercising criminal jurisdiction over many crimes and offenders, and the lack of law enforcement on rural Indian reservations is generally due to deliberate policy decisions that leave indigenous women particularly vulnerable, unprotected, and denied meaningful access to justice,” said Jana Walker, an attorney and director of the Safe Women, Strong Nations project. “When the United States denies Indian and Alaska Native women equal access to justice, or leaves them unprotected because they are indigenous, then the United States is not meeting its international obligations.”

The Center’s Safe Women, Strong Nations program uses international forums like the United Nations to place international pressure on the United States to protect the human rights and indigenous rights of American Indian and Alaska Native women. The UN Commission on the Status of Women is the UN body dedicated to the promotion of gender equality and empowerment of women. One of the Commission's primary responsibilities is to review and address problems in the implementation of the Beijing Declaration and Platform for Action, a key international instrument addressing women’s human rights. The panel and screening were co-sponsored by the Indian Law Resource Center, the National Congress of American Indians, the National Indigenous Women’s Resource Center, and the Native Women’s Society of the Great Plains.

In February, the Center and partners co-sponsored a similar panel discussion in Washington, D.C., to educate lawmakers on the pressing need for legislative action to address the issue of missing and murdered indigenous women in the United States.

Senator Heidi Heitkamp (D-ND) attended and spoke about Savanna’s Act (S. 1942), a bill she has introduced that would create new protocols for the federal response to cases of missing and murdered indigenous women.

“Savanna’s Act would mark a significant development in federal law and policy by offering tribes and advocates real tools to hold the federal government accountable and to better address this crisis,” says Foley.