Update: Implementing the American Declaration on the Rights of Indigenous Peoples 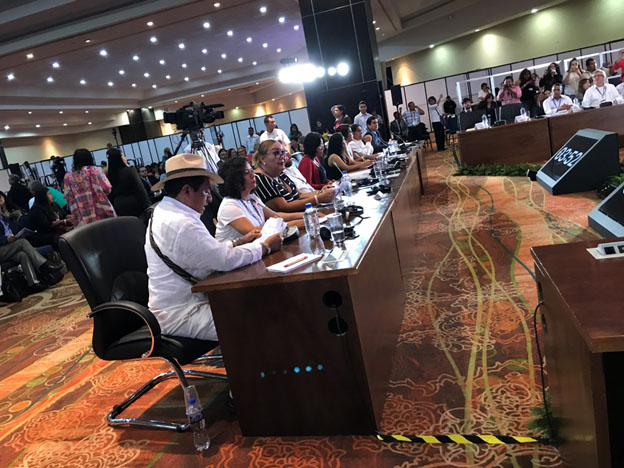 Since the of the adoption of the American Declaration on the Rights of Indigenous Peoples (ADRIP) on June 15, 2016, the Organization of American States (OAS) has outlined steps toward advancing the promises in the declaration. Last June, the OAS adopted a Plan of Action with the mission to promote policies to ensure that indigenous peoples in the Americas enjoy and exercise all their rights.  Most recently, the OAS passed a resolution to organize an annual event dedicated to indigenous peoples.

“It is encouraging to see the OAS make these pledges to promote and urge respect for the rights of indigenous peoples of the Americas,” said Armstrong Wiggins, director of the Center’s Washington, D.C. office.

To strengthen the push for the OAS to adopt a decisive Plan of Action, the Center helped organize and coordinate an Indigenous Peoples and Nations Coalition and assisted individuals who were interested in being a part of that delegation attending the 47th General Assembly in 2017. Speaking on behalf of the Coalition, Jaime Arias, a Kankuamo leader from Colombia, addressed the General Assembly a day prior to the adoption of the Plan of Action, proposing a series of concrete actions the OAS could take to implement the declaration. In their statement, the Coalition supported the idea of a monitoring and implementing mechanism within the OAS and also stressed the need for  the OAS to “regularize the permanent participation of Indigenous Peoples within the OAS, through their representative decision-making institutions.”

“Indigenous participation in OAS meetings and activities is necessary to address frequent marginalization and exclusion from decision-making on matters that affect them,” said Wiggins.  He added that indigenous participation will be particularly important during the special annual meeting of the Committee on Juridical and Political Affairs proposed in the Action Plan, which will be devoted to sharing information on progress, experiences, lessons learned, and challenges in implementing the declaration.

In February 2018, the OAS passed a resolution to declare around the 9th of August of each year the “Inter-American Week for Indigenous Peoples.” This annual event, planned to commemorate the International Day of the World’s Indigenous Peoples on August 9th, will be filled with activities aimed at recognizing and drawing attention to indigenous culture and contributions.

“We commend the OAS for taking positive steps towards the recognition of contributions of indigenous peoples to the development of societies. We believe indigenous contributions to international law, good global governance and regional challenges must be highlighted during this week,” added Wiggins.

The Center will continue raising awareness about the declaration and the Plan of Action and will remain engaged at the OAS to ensure indigenous peoples from North, Central, and South America are able directly to engage with member states and participate in the meetings and activities being carried out as part of the 4-year Plan. The Inter-American Week for Indigenous Peoples represents the first opportunity indigenous peoples will have to participate in the follow-up activities taking place at the OAS this year; the Center will give its full support to indigenous peoples attending the event.

The Center has held several workshops in North, Central and South America to inform indigenous peoples of the importance of the ADRIP as a legal instrument and about how they can apply it to advance their own rights. We look forward to continuing to train and help empower indigenous leaders, communities, and organizations throughout the region.

To read more about the Plan of Action click here.

To read the full statement of the Indigenous Peoples and Nations Coalition click here.