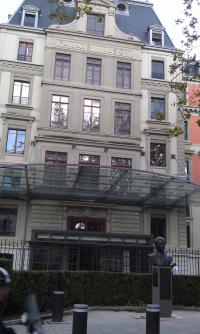 The United Nations Human Rights Committee was scheduled to conduct a review of the United States’ compliance with the International Covenant on Civil and Political Rights on October 17-18, 2013, in Geneva, Switzerland.  To help inform the Committee, the Center filed a shadow report, “Combating Violence Against Indian and Alaska Native Women—United States Violations of the International Covenant on Civil and Political Rights through its Discriminatory Legal System,” which is now part of the record for the upcoming review.   The Office of the High Commissioner for Human Rights has posted the shadow report in the general documents for the 109th Session of the UN Human Rights Committee related to the United States at http://tbinternet.ohchr.org/Treaties/CCPR/Shared Documents/USA/INT_CCPR_NGO_USA_15124_E.pdf.

The report was authored by the Center and endorsed by National Congress of American Indians (NCAI) Task Force on Violence Against Women; Clan Star, Inc.; and the National Indigenous Women’s Resource Center, Inc.  The report called attention to the epidemic levels of violence against indigenous women in the United States, particularly in Alaska, and identified gaps in United States law.  The report urged the Committee to issue Concluding Observations to reform United States law and policy; ensure delivery of safety and justice in Alaska Native villages; and provide funding and training programs for tribal law enforcement and judicial systems.

The Committee’s Concluding Observations and the shadow report are in documents for the 109th Session of the UN Human Rights Committee related to the United States at http://tbinternet.ohchr.org/_layouts/treatybodyexternal/SessionDetails1.aspx?SessionID=625&Lang=en.