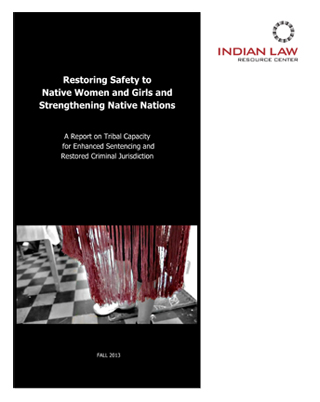 Native women and girls are not safe.  Violence against them has reached epidemic levels in Indian country and Alaska Native villages ─ rates 2½ times higher than violence against any other group of women in the United States.  One in three Native women will be raped in her lifetime, and six in ten will be physically assaulted.  The murder rate for Native women is ten times the national average on some reservations.

The Indian Law Resource Center’s Safe Women, Strong Nations project works to end violence against Indian and Alaska Native women and girls and its devastating effects on Indian nations and Native communities.  The Center collaborates with Native women’s organizations and Indian and Alaska Native nations to end such violence by removing discriminatory restrictions in United States law on the ability of these Indian nations to investigate, prosecute, and punish all perpetrators of these crimes no matter whether they are Indian or non-Indian.  The majority of these crimes against Native women are by non-Indians.  For over three decades, United States law has prohibited Indian nations from exercising any criminal authority over non-Indian perpetrators.  These restrictions, coupled with the lack of serious enforcement by federal and state officials having jurisdiction to do so, perpetuate a cycle of extreme rates of violence against Native women.

Today, the Tribal Law and Order Act of 2010 (TLOA) and the Violence Against Women Reauthorization Act of 2013 (VAWA 2013) stand as historic steps forward in restoring safety to Native women.  Yet, the need for improvement of federal law to restore full criminal authority to Indian nations is urgent.

TLOA and VAWA 2013 are only limited fixes, and many legal barriers to achieving safety and justice for Native women, girls, and Indian nations remain.  This is especially so for Alaska Native nations due to a special rule in VAWA 2013 that exempts all but one of the 229 Alaska Native nations from the special domestic violence jurisdictional provisions available to tribes.  Moreover, tribal criminal jurisdiction over non-Indians that commit domestic violence, rape, and sexual assault against Native women on tribal lands also continues to be prohibited under United States law unless the non-Indian has significant ties to the tribe.

This report assesses the readiness among Indian nations to exercise enhanced sentencing authority under TLOA and fuller criminal jurisdiction over all perpetrators of violent crimes under VAWA 2013 or other future legislation.  It also identifies challenges facing Indian nations in exercising such authority and how some Indian nations are moving forward to increase their capacity to safeguard Native women in their communities.  The report concludes with ten recommendations aimed at ending violence against Native women and girls and strengthening the ability of Indian nations to address this crisis.  We hope that the report will guide the Center, and perhaps others, in better assisting Indian and Alaska Native nations to make their communities safe places.