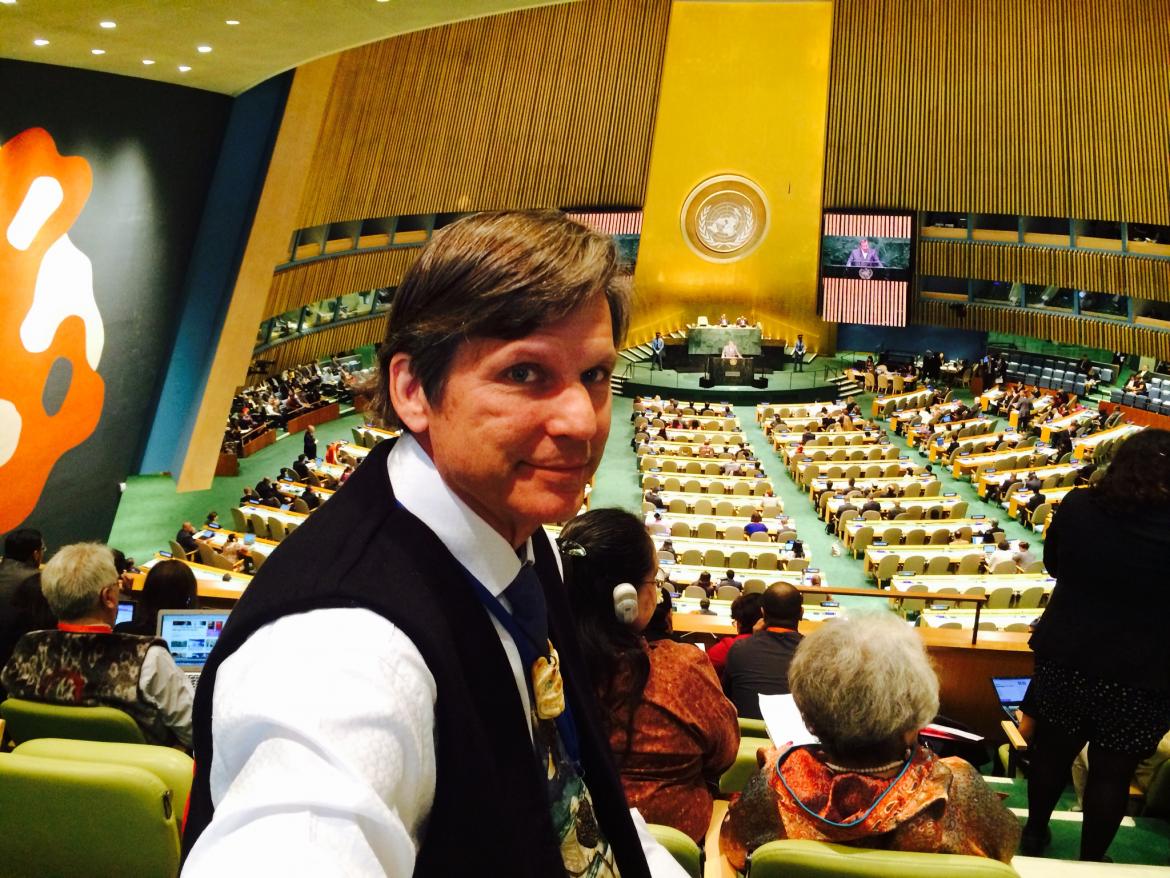 Will Micklin, 1st vice president of the Central Council of Tlingit and Haida Indian Tribes of Alaska, participated in the World Conference on Indigenous Peoples on Sept. 22-23, 2014 in New York City.

June 24, 2015 | Follow-up work on key commitments made by the United Nations to implement the UN Declaration on the Rights of Indigenous Peoples is progressing quickly. In the World Conference Outcome Document, the General Assembly agreed to (1) address the idea of an implementing/monitoring body for the UN Declaration; (2) consider ways to enable the participation of indigenous peoples’ representatives and institutions in the UN; (3) address violence against indigenous women; and (4) respect sacred places (¶¶ 19, 27, 28, 31, 33, 40 of the Outcome Document).

Below are proposals about the need for a strong and effective implementing and monitoring body by the UN, the adoption of new rules for participation of indigenous peoples’ (tribal) governments in the UN, and actions to combat violence against indigenous women. The three memoranda include more details about what elements could and should be included as the UN considers these issues in the coming months.


The following information should be used as a roadmap/schedule for important events in the next several months.

*The deadline for submitting the questionnaire has been extended until December 2015. Responses will continue to inform the development of the system-wide action plan to achieve the ends of the UN Declaration on the Rights of Indigenous Peoples, and other follow-up work of the World Conference.

2.       June 15-July 3 — Human Rights Council will meet in Geneva and consider the issue of violence against women.

4.       July — ECOSOC will meet in New York and consider the Secretary-General’s report.

5.       July 20-24 — The Expert Mechanism on the Rights of Indigenous Peoples will meet in Geneva to discuss how its mandate and composition might be changed to serve as a monitoring and implementing body.The EMRIP session will include a consultation with indigenous peoples’ representatives and states to receive comments on the draft system-wide action plan to achieve the ends of the UN Declaration. A draft of the plan is expected soon.

6.       September 14-October 2 — Human Rights Council, Geneva, will adopt a resolution or resolutions on indigenous peoples and particularly on the matter of changing The Expert Mechanism to serve as an implementing and monitoring body. The resolution(s) will then go to the General Assembly.

7.       September — the Secretary-General intends to introduce a report to the General Assembly with recommendations regarding, among other things, the implementing body and participation of indigenous governments in the UN.

If you are able to represent your nation or tribe and participate in one or more of these meetings, please notify the Center at kgeneral@indianlaw.org.  The Center is available to help with additional information about the various meetings. Center staff will be at most of these meetings and we hope that some of you can join us in this important work.