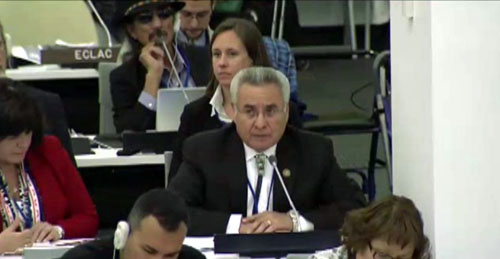 (New York City) -- The United Nations is prepared to adopt a formal document on Monday, Sept. 22, 2014, that will commit the UN and member states to take a number of actions to put into effect and encourage compliance with the UN Declaration on the Rights of Indigenous Peoples, which was adopted in 2007.  This UN action is set to take place as part of the two-day UN World Conference on Indigenous Peoples in New York City.

“The actions the UN is going to take will give lasting protection to the rights in the UN Declaration on the Rights of Indigenous Peoples,” said Robert Coulter, speaking on behalf of his own Indian nation, the Citizen Potawatomi Nation, and on behalf of the Indian Law Resource Center. “A permanent body in the UN system can do a great deal to assure that our rights are protected.  Even more important, having Indian and other indigenous governments participating in the UN will assure that we are always here to defend our rights and to work with member states to resolve problems.”

The Conference document is expected to be adopted by consensus, without a vote, after months of drafting and consultations among member states of the UN and indigenous peoples from around the world, including more than 100 Indian tribes from the United States, as well as First Nations from Canada, and Indian nations from Central and South America.

Key elements of the outcome document:

·         Initiating a process to create a permanent body in the UN system that will monitor and encourage implementation of the Declaration;

·         Considering options for a General Assembly decision to make it possible for Indian tribal governments and other indigenous governments to participate in UN meetings on a permanent basis;

·         Giving particular attention to the epidemic of violence against indigenous women, including Indian and Alaska Native women in the United States; and

·         Measures to respect and protect places sacred to Indian and other indigenous nations and peoples.

The document, among many other things, also calls for a system-wide action plan to be developed for the UN system to bring greater coherence and effectiveness to the UN’s work relating to indigenous peoples.

The Indian Law Resource Center, an international human rights organization working on behalf of Indian and other indigenous peoples in the Americas, is one of the organizations that played a leading role in the preparations for the World Conference over the past two years.

This World Conference is the first time that large numbers of Indian and Alaska Native governments from the United States have been actively involved in UN work.  Jefferson Keel, Lieutenant Governor of the Chickasaw Nation and past president of the Nation Congress of American Indians, is one of those who has been prominently involved. “We are taking our places once again as members of the world community,”  said Keel.

According to Coulter, tribes are committed to working with the General Assembly and other UN bodies to see that the commitments in the outcome document are carried into effect in the months to come.