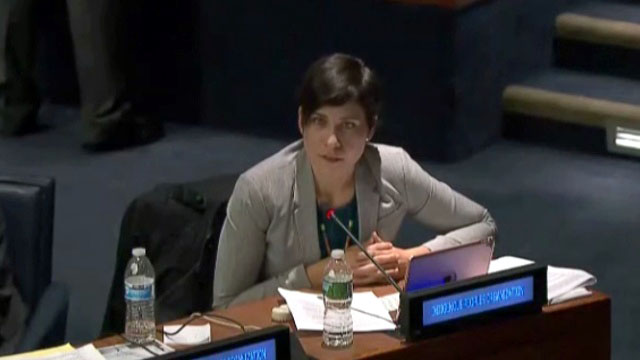 December 15, 2017 | The United Nations has delayed substantive action on their work to enable the participation of indigenous peoples’ representatives and institutions at the UN. After years of discussions among indigenous peoples and member states, and several weeks of states-only negotiations during the summer of 2017, member states were not able to reach consensus on the details of how to create a new status or category for indigenous governments.

Instead, on September 8 2017, the General Assembly adopted a resolution that establishes a new, multi-year schedule of consultations and discussions about the details of these important questions.

“It is disappointing that the UN was not able to follow through on its commitments to enhance the ability of indigenous peoples’ governments and representative institutions to contribute to the UN’s work,” said Karla General, Indian Law Resource Center attorney. “Despite being some of the first governments of the world, indigenous peoples’ governance institutions are among the last to be afforded access to the UN. Yet, we are encouraged to see there will be a clear calendar for continued discussions of this matter in the coming years. There is much work to be done to secure a good outcome, and we remain committed to working with indigenous peoples around the world and with all member states to do so.”

Indigenous peoples and member states have been consulting and working on developing common language on participation since the World Conference on Indigenous Peoples in 2014. In May 2017, an initial first draft of the resolution, based on input from indigenous peoples, member states, and UN agencies, was submitted for consideration by member states. After many negotiations and multiple revisions, states reached an impasse on the question of a no-objection procedure, a mechanism that would allow a member state to secretly exclude an applicant from being credentialed to participate at the UN without providing any reasons. Because this process is secret, the no-objection procedure would effectively shield the objecting member state from political repercussions and public scrutiny.

Because of the lack of consensus, the resolution that has been adopted simply commits the General Assembly to continue consideration of the issue in the coming years, and delays any actual decision on participation until the 75th Session of the General Assembly, which begins September 2020 and ends September 2021. In the interim, the Secretary-General is tasked with coordinating regional consultations with indigenous peoples and producing a report with recommendations informed by the results of the regional consultations and the 2017 consultations. In addition, the draft resolution asks the President of the General Assembly to conduct three interactive hearings among member states and indigenous peoples during the Permanent Forum on Indigenous Issues’ annual sessions in 2018-2020. The first of these interactive hearings is expected to take place on the sidelines of the next session of the Permanent Forum on Indigenous Issues that will be held April 16-27, 2018 at UN Headquarters in New York.

The results of the consultations, the Secretary-General’s report, and the hearings are all intended to contribute to future consideration of the issue.

General Assembly Resolution 71/321: Enhancing the participation of indigenous peoples’ representatives and institutions in meetings of relevant United Nations bodies on issues affecting them

Participation at the UN – UNGA process

Enabling the participation of indigenous governments at the UN